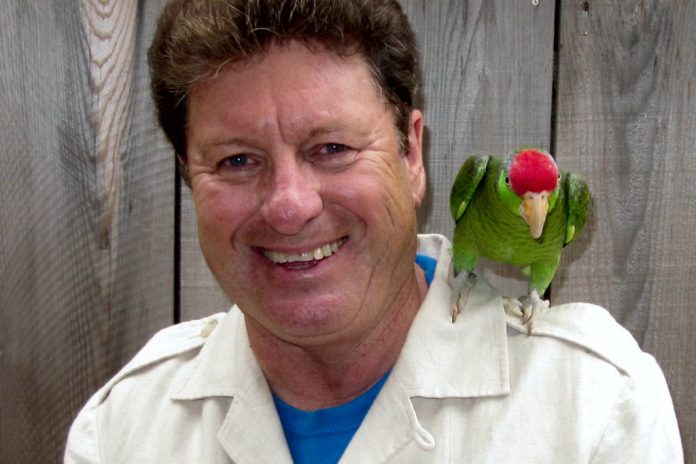 The beginning of this story was written 11 years ago when my girlfriend rescued a one-week-old injured Amazon parrot. He was lying helpless in the street in front of my Ocean Beach apartment. Kathy scooped him up saving him from a speeding car and a nearby cat that was eyeing him up as an afternoon snack.

You must understand, I was not a bird person; I’ve always been a dog and cat guy. In fact, Hitchcock’s movie, The Birds scared me more than The Wolfman movie and Freddy Kruger combined. Subsequently I’ve never even considered having a bird as a pet.

So with tears in her eyes Kathy hands me what looked like a clump of feathers with a tiny beak and a foot encased by what I assumed was a large ball of tar.

I had no idea what to do, but it was obvious that tar had to be removed. So I took the fur ball into the bathroom and laid out my surgical tools that consisted of: A pair of Kathy’s eyelash tweezers, my nose-hair plucker and a pair of fingernail clippers. I was now ready to operate.

To fully appreciate why I was a tad fearful of what I was about to try we must jump into Mr. Peabody’s Time Machine to the year 1984.

While employed a co-host of PM magazine I was in Singapore doing a story on Sarong Bird Park in Singapore. With a giant Macaw perched on my arm I began to interview his trainer. The bird began gripping my forearm tightly as if trying to show me whose boss. I grinned at him and kept right on talking. To which the Macaw dug in tighter until trickles of blood began to flow. That wasn’t going to stop me. I finished the report and shot the bird a cocky grin as if to say, ‘who’s your daddy now’ In response the McCaw bit off a large tree limb and spit it in my face as if to ask me, ‘Who’s your daddy now TV boy?’

I carefully clipped, snipped, and filed at the tiny parrots feet until he was freed from the gunk around his foot. Througout the operation he just looked at me though eyes that could barely open. To this day I often wonderd what he was thinking.

The question was, now what in the heck to I do. Put him in some palm tree and hope his parents show up? Take him to a bird store? I was facing quite a delima. Kathy, who once raised Macaws and other large birds was in Wisconsin for a month.

So I told the bird he could stay one night while I thought things though. I went to the bird store and purchased a mix for baby Amazons and a tube for feeding. Then I want home and turned the downstairs into a parrot safe room. I bought a palm tree for him, and ladders for climbing. But just to be safe I slept downstairs on the sofa in case he needed me in the middle of the night.

Around 3 a.m. I felt something crawling up my leg. Guess who? He sat nestled against my face the rest of the night. When I got up I told him he could stay one more night. That was 11 years ago this month.