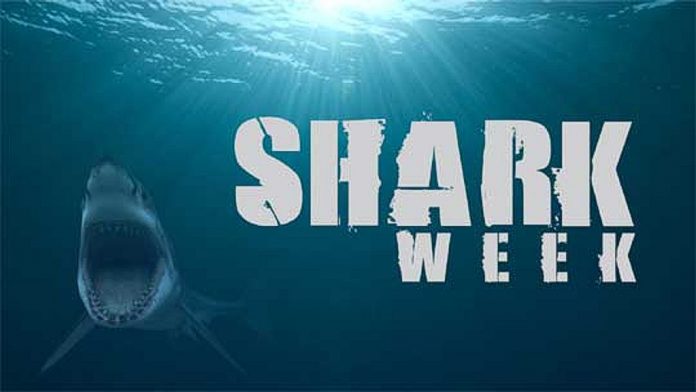 Shark Week is an annual, week-long TV programming block created by Tom Golden at the Discovery Channel, which features shark-based programming. Shark Week originally premiered on July 17, 1988. Featured annually, in July or early August, it was originally devoted to conservation efforts and correcting misconceptions about sharks. Over time, it grew in popularity and became a hit on the Discovery Channel. Since 2010, it has been the longest-running cable television programming event in history. Broadcast in over 72 countries, Shark Week is promoted heavily via social networks like Facebook and Twitter. Episodes are also available for purchase on services like Google Play Movies & TV/YouTube, Amazon Video, and iTunes. Some episodes are free on subscription-based Hulu.

Celebrate the 25th Anniversary of Shark Week with the biggest week yet with all new shows showcasing this beautiful, but feared predator. Experience newly discovered shark science, resurrect the largest shark ever to swim the oceans, and take a look back at the top Shark Week moments from the past. If you were any closer you’d be bait!

Shark Week is back with a vengeance and this year, it brought a friend! Comedian Andy Samberg is Discovery’s Chief Shark Officer (CSO) and he joins the sharks to combine comedy and action to summer’s must-see television event. With seven new programs, Discovery explores these predators’ psyche. How do sharks hunt? What makes them unique? Why do they attack humans? Learn the answers on Shark Week 2011.

Shark Week is back! With more bites, blood, and real life stories of people who came face to face with one of the deadliest animals in the world and lived to tell about it. Watch some of the most jaw-dropping moments, filmed with high tech cameras from extraordinary angles. From Great Whites blasting out of the water at 25 mph to learning how to survive a Shark Attack, Discovery brings the sharks to you.

Sharks are most aggressive and most active in the dark, but the fact is, we know very little else about the nocturnal nature of these creatures. Now, armed with the latest in infrared thermography cameras and night vision technology, a team of divers travels around the world, and descends into the sharks dangerous after-dark hunting grounds. Their goal is to learn more about how Great Whites, Six-Gills, and Tiger Sharks behave after the sun goes down. Shark Week is back!

The Shark Week the Great Bites Collection includes nearly six hours of the best footage from the Discovery Channel series whose hosts swim with the ocean’s most feared predators. See the world’s rarest and deadliest sharks, learn why they sometimes prey on two-legged swimmers and what you can do to avoid becoming shark bait.

It’s not summer without Shark Week, and in 2007, the ultimate must-watch summertime television event turned 20–making it cable’s longest-running event. Shark Week’s 20th Anniversary features shark programs devopted to the behavior of one of the most mysterious and majestic creatures on teh planet. For the past two decades, Shark Week has intrigued, educated and enthralled viewers. And every year since its inception, Shark Week has partnered with the world’s most renowned shark scientists and experienced underwater cinematographers to bring viewers the latest information about the ocean’s top predator.

Lurking silently beneath the ocean’s placid surface is one of nature’s most terrifying creatures, a powerful predator who can rip its prey apart in a matter of seconds! Now experience actual shark attacks and rescues captured on film. Explore the science, myths and mystery of this fearsome predator in 14 favorite Discovery Channel programs from Shark Week!

Birth of a Black Rhino at the Cincinnati Zoo

When Harry Became Sally: Responding to the Transgender Moment