Lots of us use Facebook as a convenient way of receiving information about the people in our lives we don’t call every day — and people we don’t know that well whose lives we enjoy watching from afar. Your college friend got engaged, yay! Your favorite cousin is moving across the country, boo. A girl you met once at a party who’s baring her midriff in her profile picture wrote on your fiancee’s wall — hold on, where’d she come from?

Enter the green-eyed (or in this case, blue and white logo’ed) monster known as Facebook jealousy. Messaging someone you hooked up with before you met your current love interest, analyzing a wall post on your significant other’s page, stewing over a suspicious picture but not actually asking about it — all of these have been known to tank relationships.

If you’re prone to thinking, “It’s just Facebook — can it really cause that many problems in an adult relationship?” consider this: A 2009 study suggested Facebook makes “unique contributions to the experience of jealousy in romantic relationships.” Divorce attorneys say Facebook flirtations are frequently cited in their cases. And this poor guy had an asthma attack supposedly prompted by seeing how many men his ex-girlfriend had friended since their breakup. There’s even a Facebook page called “I wonder how many relationships Facebook ruins every year” with over 100,000 “Likes.”

“It’s a very common topic,” said Jennine Estes, a couples’ therapist from San Diego who reported that she sometimes hears about Facebook issues on a daily basis in her office. Couples come into conflict over everything from one party reconnecting with an ex to one not mentioning the relationship on Facebook at all.

And these problems aren’t limited to relationships with pre-existing problems. Facebook presents so many challenges to committed relationships that Jason and Kelli Krafsky wrote a book called, “Facebook and Your Marriage.”

To be clear, Facebook itself isn’t to blame for the demise of domestic bliss. Instead, it’s an avenue by which threats can develop if you fail to communicate about them, and one that can exacerbate problems that already exist.

According to Estes and the Krafskys, here are the scenarios that cause the most relationship strife, and how to address them:

Before addressing what you may hide from your partner on Facebook — and the jealousy that behavior may provoke — it’s a good idea to first talk about what you’re both comfortable sharing. Just because one of you likes to do the internet equivalent of shouting from the rooftops how in love you are doesn’t mean the other one should have to suffer through it. On the other hand, if one of you never references the relationship on your page, the other may begin to wonder why.

“Have a face-to-face conversation about Facebook,” says Jason. “You want to have open communication about how much about ‘us’ is going to be spilled.” The same goes for changing your status or friending your significant other’s family members: It’s best to talk about it first.

Tagged Photos Of You With Your Ex

You’re not alone (or irrational) if you get a little nauseous every time you see evidence of your significant other’s weekend in Cabo with his ex. In the same vein, you shouldn’t be surprised if your boyfriend isn’t interested in having a reminder of the guy you dated right before him.

“It is hard to see those,” says Estes. “For your partner to see you cuddling on the beach on a date? That’s going to sting for any human. … Other people might have a tougher skin, but I say [err on the side] of caution. Do some preventative work. Better to be safe than sorry.”

Having a hard time untagging yourself in those photos? Estes suggests asking yourself why that is.

“Do you need to have it up? That’s the big question: What’s the purpose of it?”

Jason and Kelli likened the tagging issue to going home to your parent’s house and them still having pictures on the wall of you and your old boyfriend.

“There’s a creep factor,” says Kelly. “It’s almost like time has stood still and your life hasn’t gone on.”

When deciding what to untag (or not), the best approach is for both partners to agree to untag themselves from photos that make the other uncomfortable.

You Just Got A Friend Request From An Ex

“We’ve heard horror story after horror story,” says Kelli. “The moment you open the door, you could be two to three clicks away from making a really poor decision. You could be in a vulnerable state. You could have had a couple glasses of wine. It could open temptation to revisit the past.”

But what if you’re 100 percent not tempted by an ex? Is there any harm in accepting the request? Yes, said Jason, because you don’t know what the person on the other end of that friend request is thinking. They might have been pining for you all of these years, waiting for the day you reconnect.

Estes suggested addressing these requests on a case-by-case basis: It’s how you handle it that matters to your current relationship.

“Make your partner part of the decision,” she says. “The more included they feel, the safer it is.”

Someone You’re Already Friends With Gets Friendlier

In some cases, existing friends you have a past with are harmless and can remain that way — though Kelli suggests hiding them on Facebook to avoid trips down memory lane.

Then, there are the people the experts refer to as “red flag” friends. These could be people you’ve never dated who’ve started to show an interest or actual exes.

“Facebook allows people to be bolder. They utilize it as a way to say, ‘Hey I’m interested,'” says Kelli.

These problem friends can be exes, though they don’t have to be, and they’re a common enough issue that Estes mentions them on her website:

“Sometimes people may cross a line by posting inappropriate messages or flirty comments. If this person is a red-flag for either you or your partner, it may be time to delete them from your friends list or you may need to confront the issue straight on.”

Either way, the couple needs to agree about these friends. It’s a fact that there’s an unspoken awkwardness to defriending — won’t it show your ex that he or she still has a hold on you? — but in some cases, it’s necessary. And it’s probably time to stop caring about what your ex thinks, anyway.

You See Something Worrisome On Your Significant Other’s Page

When couples sees a post on their partner’s page that makes them uncomfortable, they shouldn’t just let it go. Not asking can lead to mistrust and assuming the worst based on two random sentences whose context you don’t know.

“Our minds automatically try to guess what the full story is. Most of the time, [they] go to worst-case scenario and try to predict something that’s not necessarily the case,” says Estes.

By not asking about the posts, “They’re attempting to protect the relationship, or they don’t want to risk being seen as stupid or crazy, but then the problem never gets resolved. They don’t get the reassurance that they’re needing.”

If you follow all the above, you’ll avoid the biggest pitfall of all:

The problem isn’t that secrets are no fun; it’s that they make otherwise normal people lose trust in each other and morph into amateur private investigators.

“They’ll do research, they’ll run into interactions that have been going on,” Estes warns.

It’s not cool for your partner to snoop, but if you’re not up-front with him or her about your Facebook habits, they’ll probably find that one person who hasn’t checked their privacy settings since Facebook changed them for the billionth time, and see evidence of you being inappropriate.

That all said, our experts agree that the golden rule of Facebooking while committed is that on FB, as in life, you shouldn’t be doing anything that you wouldn’t want your partner to see.

“Facebook isn’t usually the problem,” says Estes. “It’s the behaviors that are the problem.” 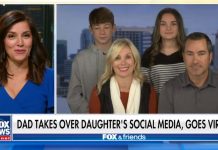