From the most beautiful fish tanks to some incredible tourist destinations, this is a list of twelve of the largest and most famous aquariums on earth and they will amaze you!

In the Pudong New District of Shanghai, you will find a large and very interesting aquarium. At over 260,000 square feet, this place is massive. But, it also has numerous different areas and exhibits that are built to show off the specific creatures that live in various areas of the world.

In terms of age, the John G. Shedd Aquarium is one of the oldest aquariums in the world. How old is it? Well, it was built in Chicago, Illinois in 1930. Which means that this aquarium is very nearly 90 years old. Not bad huh? Especially given that aquariums aren’t always the attractions that people believe them to be.

If you want to see one of the biggest aquariums in the world, you’ll need to head to Valencia, Spain. Here, you will find Oceanografic. Interestingly, this particular aquarium is not its own building, but part of an educational/science/ architectural complex known as the City of Arts and Sciences. Oh, but don’t think that they skimped on the aquarium because of this! They hired architect Félix Candela to design the place and it’s visually stunning.

Korea is known for many wonders and cultural joys, but one of the best in the country has to be the Aqua Planet Jeju. The place is actually named after the island it is situated on, which just off the shore of the southern part of the country.

The people of Dubai don’t like to do anything small, and that’s not a bad thing at times. For this is why the Dubai Mall is one of the largest shopping centers in the WORLD. And within that mall, you’ll find the Dubai Aquarium. One thing you should know instantly is that this aquarium holds a lot of creatures. How many? How about 33,000? And that’s individual creatures, not species.

While it may have a long name, the Kenting National Museum of Biology and Aquarium is also one of the biggest aquariums in the world, and something I personally find interesting is that it resides within a water park in Taiwan. Specifically, in Kenting. So in a way, you could go and enjoy the waters of the park, and then dry off and go see the creatures of the world that live in the water.

Japan is known for many things, and in terms of aquariums, it’s known for the Osaka Aquarium Kaiyukan. This place was actually designed by an American, Peter Chermayeff, and it finished its construction back in 1990. True to his American nature, Peter made a very stylish aquarium, one that is aesthetically pleasing both inside and out.

Built in 2015, and housed within the Century Global Center (which is actually the world’s’ largest freestanding building), the Cube Oceanarium is a testament to how big and grand aquariums can be. For not only does it have 33,000 creatures within the waters of the place, it is also home to the biggest jellyfish in the world, and for those who know jellyfish, that’s quite a feat.

The Churaumi Aquarium is so beloved, that it is considered by many to be the best aquarium in all of Japan. It’s part of the Ocean Expo Park, which can be found in Motobu, in Okinawa. Furthermore, up until 2005, it was the largest aquarium in the world. An impressive feat.

Welcome to Singapore, care to see what we have in our water…tanks? The S.E.A. Aquarium has many things to distinguish itself from other aquariums, including having the largest collection of manta rays in the world today. This including the giant oceanic manta ray, one of the few in captivity. These rays can grow over 20 feet in length, and are truly a wonder of the ocean.

Located in Atlanta, which is the capital of the state of Georgia, this aquarium is hands down the biggest aquarium in all of the western hemisphere. Nothing really comes close.
Furthermore, this aquarium is the only place not in Asia to be home to a Whale Shark. But you won’t just find this shark there though, you’ll find dolphins, beluga whales, and so much more.

Should it really be surprising that China has the biggest aquarium in the world? The Chimelong Ocean Kingdom not only has the largest singular tank in the world (though some would fight that based on measuring), but it also contains the most volume of water in the world in regards to aquariums. Securing its rank as the biggest in the world. 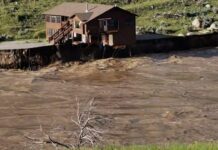