In My Octopus Teacher a filmmaker forges an unusual friendship with an octopus living in a South African kelp forest, learning as the animal shares the mysteries of her world.

My Octopus Teacher is a 2020 Netflix Original film directed by Pippa Ehrlich and James Reed which documents a year spent by filmmaker Craig Foster forging a relationship with a wild common octopus in a South African kelp forest.

The film shows how, in 2010, Foster began free-diving in a cold underwater kelp forest at a remote location in False Bay, near Cape Town, South Africa. The location was near Simon’s Town on the Cape Peninsula, which is exposed to the cold Benguela current of the Atlantic Ocean. He started to document his experiences and, in time, met a curious young octopus that captured his attention. He decided to keep visiting her den and tracking her movements every day for a year to win the animal’s trust. The two form a bond where she plays with Foster and allows him into her world to see how she sleeps, lives, and eats. In the film, Foster describes the impact on his life of his relationship with the octopus.

The film shows Craig’s growing intimate relationship with the octopus as he follows her around for nearly a year. It shows the octopus defending herself against pyjama sharks. In one attack, the octopus loses an arm, and retreats to her den to recover, regenerating the arm. In a later attack of a shark, she shows an incredibly improved creativity to survive, including sticking on the sharks back. Later, after mating with another octopus and producing a large number of eggs, the octopus dies naturally and a shark takes her body away.

Foster describes the effect of this mentorship that the octopus provided him with as teaching him a lesson on the fragility of life and humanity’s connection with nature.  This translated to Foster creating a deeper bond with his son as his son develops as a diver and marine life student.

Birth of a Black Rhino at the Cincinnati Zoo 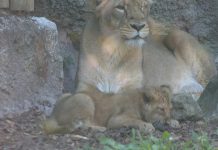 Birth of two Asian lion cubs at the Rome Zoo