The U.S. World War One Centennial Commission Proudly Announces that the National World War I Memorial in Washington, D.C. Is Now Open to the Public

At last we are honoring the heroism and sacrifice of the 4.7 million American sons and daughters who served in WWI. Their sacrifice in this war was great. In just a short 18 months the Nation raised and trained a massive fighting force. Over 2 million deployed “Over There”.  204,000 Americans returned home wounded and 116,516 did not come home at all.
Their service, valor and courage equaled that of veterans from later wars and now at last our WWI veterans are being remembered in our Nation’s capital.

We are proud and excited that at last with the opening of the Memorial to the public on April 17, 2021, we are at last honoring the heroism and sacrifice of the Americans who served with the creation of the National World War I Memorial in Washington.

Every major American war fought in defense of freedom is honored with a national Memorial–except World War I.

“A Soldier’s Journey” is a short-form documentary motion picture that provides a “first look” into the making of the national Memorial to be built in Washington DC’s newly-configured Pershing Park.

Told in the words of Americans whose stories frame both the war and this ‘wall of remembrance,’ the film explores the themes of the conflict as expressed in the centerpiece of that wall, a 57-foot bronze bas-relief.

Sculptor Sabin Howard shows how he transformed 12,000 original photographs into an inspiring bronze tableau that illustrates the nation’s Coming of Age in the 20th century, as America united to end a war that took many millions of lives. Other key participants include Sandra Pershing, granddaughter-in-law of General John ‘Blackjack” Pershing; Gerald York, grandson of the hero immortalized in the movie ‘Sergeant York’; and Ambassador (ret) Carol Mosely Braun, who honors the service of her grandfather, one of more than 300,000 African-Americans who answered the call to arms.

“A Soldier’s Journey” commemorates the 116,516 Americans who made the ultimate sacrifice and renews our pledge: To protect our future…by remembering our past. 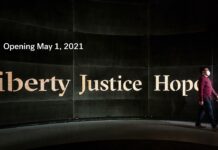