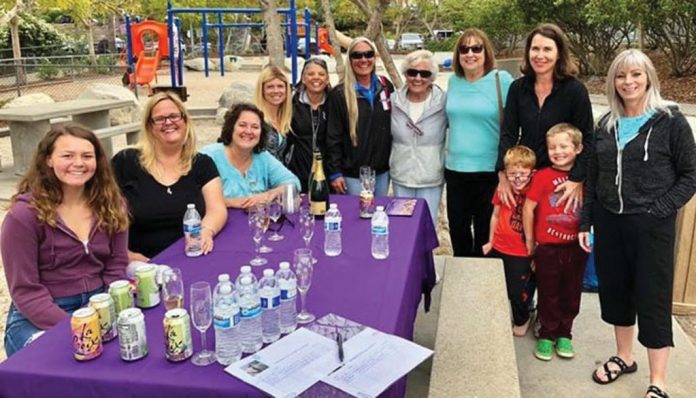 Harley, a ferial female feline united an entire community that banned together to do what animal lovers do best, which is to take care of our four-legged friends when they need help.

Harley had no idea she was going to cause such a fuss, or that her adventurous nature would make her the talk of the town and an Internet sensation.

It all started when this sneaky cat snuck into JL Nuss’ backyard searching for a snack. What happened next was one for the books, or in this case one for the Scripps Ranch News.

“One day we saw a very skinny cat eating some cake crumbs we left in our yard for the birds,” said J.L Nuss. “We named her Harley for Harlequin and began feeding her; she very quickly put on a lot of weight.”

Harley’s weight wasn’t due to a high-carb diet; she was preparing to deliver a litter of little Harleys. Six weeks later the Nuss clan had a handful of newborn kittens running around in their backyard.

“On March 17, 2019 Harley delivered her second litter in my backyard, then carried them to my neighbor Sharon’s yard,” said Nuss. “Harley would come and go at will to visit her kittens, leaving my family in charge of feeding and caring for them.

The Nuss family wanted to trap Harley and put an end to her wild ways but she was a sly puss and avoided capture with ease.

“My mother-in-law, who is 80 years-old, asked the Ferial Cat Coalition in El Cajon for help,” said Nuss. “They offered us traps but we had to set them up, capture the cats and cart them to El Cajon ourselves. We had no clue how to set a trap.”

Trying to wrangle a mob of curious cats and a very street-smart momma’ cat was not an easy task. To make matters worse, Harley showed up with another tummy full of fun that she again deposited in Nuss’s backyard.

With a brood of six new baby kittens to deal with, the cat friendly Nuss family was in way over their heads and needed help, but they had no idea who to turn to for assistance. Sometimes help can be just around the corner, or in this case, a grocery store checkout line.

While shopping, Nuss’s mother-in-law dropped a case of water; customers Mitzi and Keith Reel came to her assistance. Mitzi, a cat person, noticed the woman was wearing a scarf adorned with kittens.

A conversation ensured about Harley that resulted in the Reels jumping on the Harley bandwagon. They were members of the Real House Cats of Scripps Ranch website, and with a few strokes of the keyboard, Operation Harley was born.

Nuss also needed someone to be foster parents for the kittens, and in less time than it takes to whistle, “What’s New Pussycat” Jennifer Ott Roi and family volunteered to take on the task.

“Jennifer and her husband took all five cats and fostered them for two months, and as of last Thursday we got them all adopted except for the two they kept,” said Nuss. “We also got The Kitten Lady (a TV Personality) involved. She got us in touch with Val from the Rescue House.”

The Rescue House began setting up traps, and although it took a year, Harley was eventually caught and her days of having kittens put to an end.

Harley and her adopted kittens continue to be celebrities thanks to daily posts on the Real House Cats website.

Harley’s story could have been a catastrophe. But thanks to J.L. and her animal friendly neighbors; it all ended purrrrrrfectly.