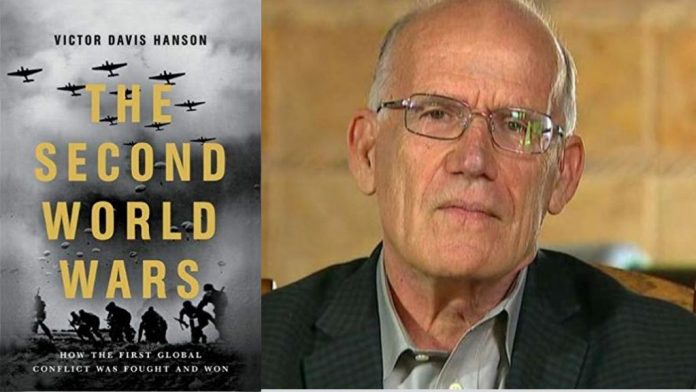 How were the Axis powers able to instigate the most lethal conflict in human history? Find out in part one of this episode as military historian, editor of Strategika, and Martin and Illie Anderson Senior Fellow, Victor Davis Hanson, joins Peter Robinson to discuss his latest book, The Second World Wars: How the First Global Conflict Was Fought and Won.

Victor Davis Hanson explains how World War II initially began in 1939 as a multitude of isolated border blitzkriegs that Germany continued to win. In 1941, everything changed when Germany invaded their ally, the Soviet Union, and brought Japan into the war. He argues that because of the disparate nature of World War II, it’s much harder to think about as a monolithic conflict.

World War II was the deadliest conflict in human history with approximately sixty million people killed. Victor Davis Hanson argues that World War II and the many lives lost was preventable, but due to a series of missteps by the Allied forces, Germany believed they were stronger and their enemies weaker than the reality. He argues “it took Soviet collusion, American indifference or isolation, and British or French appeasement in 30s” to convince Germany that they had the military capabilities to invade western Europe. In the aftermath of World War I, the allies believed the cost of the Great War had been too high, while Germany bragged about their defeat as no enemy soldiers had set foot on German soil. Great Britain and France both chose appeasement over deterrence, which encouraged rather than deterred Hitler and Germany from moving forward with their plans.

Could the Axis powers have won? What are the counterfactuals for World War II? Find out in part two of this episode as military historian, editor of Strategika, and Martin and Illie Anderson Senior Fellow Victor Davis Hanson joins Peter Robinson to discuss his latest book, The Second World Wars.

Victor Davis Hanson explains the counterfactuals of World War II, the “what-ifs” that easily could have changed the outcome of the war. If Hitler had not attacked Russia or the Japanese had not attacked Pearl Harbor, the USSR would have never turned on Germany and the United States would have never entered the war. Hanson argues that the leaders of the Axis powers overreached in their strategies, which ultimately caused their downfall. Hanson also explores the counterfactual surrounding the American commanders and the “what-ifs” that could have prevented American success in the war.

Victor Davis Hanson also reflects on his own family history and connections to World War II and how it shaped him as both a person and a scholar in his life today. He talks about his motivations to write his latest book, The Second World Wars, and how his family history and the current political climate inspired him to write it.

Victor Davis Hanson is the Martin and Illie Anderson Senior Fellow in Residence in Classics and Military History at the Hoover Institution, Stanford University; a professor of Classics Emeritus at California State University, Fresno; a nationally syndicated columnist for Tribune Media Services; host of the Classicist podcast; and the editor of the military history journal, Strategika. He is also the Wayne & Marcia Buske Distinguished Fellow in History, Hillsdale College, where he teaches courses in military history and classical culture every fall semester. Hanson is the author of hundreds of articles, book reviews, scholarly papers, and newspaper editorials on matters ranging from ancient Greek, agrarian, and military history to foreign affairs, domestic politics, and contemporary culture. He has written or edited twenty-four books, the latest of which is The Second World Wars. Read more about the guest here.