The U.S. Air Force said Monday it had successfully tested a hypersonic missile off the coast of Southern California on Dec. 9.

The hypersonic missile, known as the AGM-183A Air-launched Rapid Response Weapon (ARRW), was launched from a B-52H Stratofortress bomber while in the air.

The United States has been testing its hypersonic missile capabilities amid growing concerns Russia and China have had more success developing their own hypersonic weapons.

The Lockheed Martin-built hypersonic missile reached over five times the speed of sound after it was fired from the bomber. The missile flew its scheduled flight path and detonated at its target, according to the Air Force.

“I am immensely proud of the tenacity and dedication this team has shown to provide a vital capability to our warfighter.”

The “All-Up-Round” test of the full prototype by the Air Force was similar to the two previous booster tests in that they were launched from a bomber flying off the coast of Southern California.

However, the test last week was the first of the entire system, with previous missions concentrated on the booster rocket.

The Pentagon is eager to advance progress on hypersonic missile testing and development, particularly since China and Russia have demonstrated progress in their own projects.

In March, Russia said it had used hypersonic missiles to destroy Ukrainian military assets in what marked the first time Moscow has acknowledged using this type of weapon in combat. In a March 19 operational report, Russia’s military ministry stated that it destroyed a massive underground storage site for missiles and aircraft ammunition in Ukraine’s Ivano-Frankivsk area.

Last year, a secret Chinese hypersonic missile circled the earth and struck down toward a target. To address the threat, U.S. lawmakers urged that long-stalled military research be restarted. 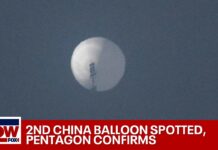