Some $2 million has been raised for a Marine who was put in the brig for speaking out against the U.S. military’s leadership amid the chaotic Afghanistan evacuation.

More than $2.2 million was raised for Lt. Col. Stuart Scheller after more than 29,000 donors contributed. Scheller is awaiting a hearing over viral videos in which he called for accountability from top leaders in the military and the Department of Defense.

He was placed in confinement at the Regional Brig for Marine Corps Installations East at Marine Corps Base Camp Lejeune, officials said. About a week ago, the Marine Corps confirmed his detainment, although it’s not clear when his Article 32 hearing will take place.

“The time, date, and location of the proceedings have not been determined,” Marine Corps Training and Education Command spokesman Capt. Sam Stephenson told Task & Purpose. “Lt. Col. Scheller will be afforded all due process.”

In August, Scheller gained viral fame after posting a video on social media alleging that top military brass were not taking responsibility for how the military withdrawal from Afghanistan was handled, including the ISIS terrorist attack that left 13 service members dead in Kabul.

“The reason people are so upset on social media right now is not because the Marine on the battlefield let someone down,” Scheller said in a video posted several weeks ago. “People are upset because their senior leaders let them down. And none of them are raising their hands and accepting accountability or saying, ‘We messed up.’”

After releasing several videos, Scheller was reportedly told by his superiors to stop posting on social media entirely. He appeared to ignore that alleged directive by writing about the gag order in his most recent social media post.

In one post, he announced that he was relieved from his position as the battalion commander for the Advanced Infantry Training Battalion at School of Infantry East at Camp Lejeune, North Carolina. In another post, Scheller suggested in a post that he could be taken to the brig. 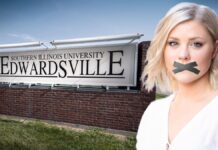