WASHINGTON (Legal Newsline) – Georgia, Kentucky, Florida, and Texas are among 20 states whose attorneys general have signed off on a letter to U.S. Department of Homeland Security (DHS) Secretary Alejandro Mayorkas demanding that his Disinformation Governance Board be immediately dismantled.

The creation of the new federal agency violates constitutional freedoms by abridging an individual’s right to express their opinions and disagree with the government, according to Carr.

“The President does not have the authority to censor public discourse and to do so would infringe upon the First Amendment right enjoyed by all law-abiding citizens,” he said.

The DHS announced the new entity on April 28, three days after Tesla CEO Elon Musk acquired Twitter on April 25, according to media reports.

Nina Jankowicz was tapped to lead the Disinformation Governance Board.

“The Biden Administration’s creation of a Disinformation Governance Board poses a serious threat to the First Amendment rights of Kentuckians and citizens across the country,” said Kentucky Attorney General Daniel Cameron. “We must be able to disagree and debate without having those opinions labeled as misinformation by a government board.”

The letter, which was printed on letterhead from the Virginia Attorney General’s office, states that the Disinformation Governance Board threatens to ‘enforce silence’ when Americans wish to express views disfavored by the administration.

“It is therefore already chilling free speech and impeding the political process,” Virginia AG Jason Miyares wrote in the May 5 letter. “This is unconstitutional, illegal, and un-American. Unless you turn back now and disband this Orwellian Disinformation Governance Board immediately, the undersigned will have no choice but to consider judicial remedies to protect the rights of their citizens.”

“President Biden is attempting to confuse and distort legitimate criticism and the perspective of American citizens,” said Florida AG Ashley Moody. “This authoritarian maneuver could be straight out of the novel 1984 and should frighten Americans of all political persuasions.”

The new board will erode democracy, according to Texas Attorney General Ken Paxton.

“You cannot simply label as ‘disinformation’ all speech you disagree with or find politically damaging to your cause and expect the American people to tolerate the government telling them what they can think or say,” he said. 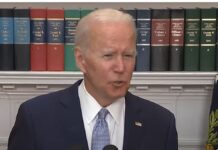