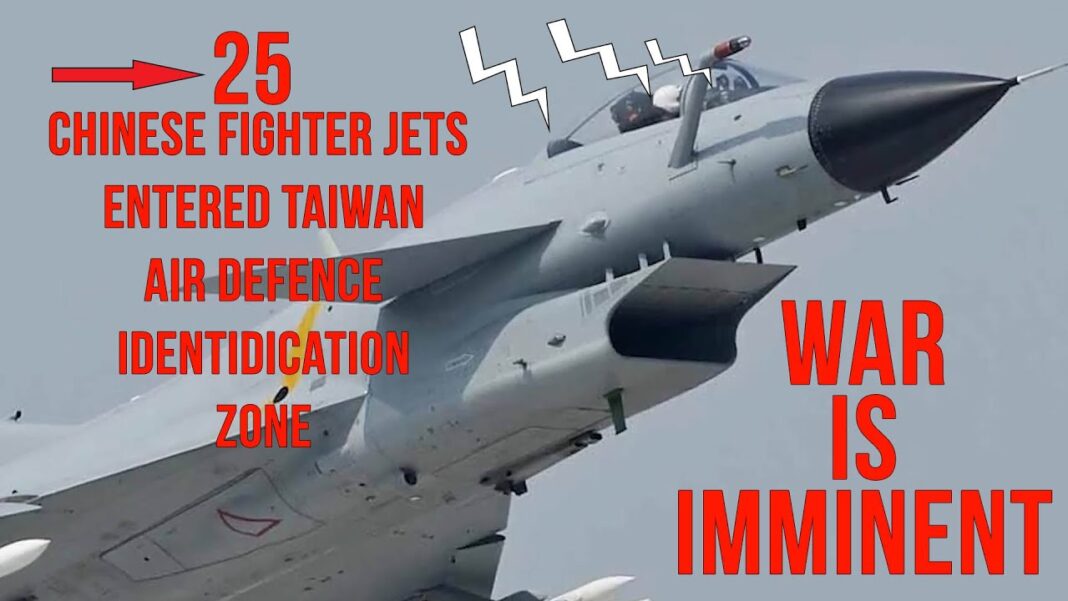 The Chinese communist regime flew 25 fighter jets into Taiwan’s Air Defense Identification Zone (ADIZ) on Oct. 1, a national holiday in China when the Chinese Communist Party (CCP) commemorates its hostile takeover of the mainland in the late-1940s.

Taiwan responded to the hostile actions by deploying air patrol forces and tracked the Chinese aircraft on its air defense systems, the Taiwanese Ministry of National Defense said.

The ADIZ is a specific area beyond a country’s sovereign territory within which the country requires the identification, location, and air traffic control of aircraft in the interest of its national security.

China has sent military planes toward the island that it claims as part of its territory on a near-daily basis in the last couple of years, stepping up military harassment with drills.

The CCP claims that Taiwan is its territory, in spite of the fact that Taiwan has been self-governing since 1949, and that it has never governed Taiwan.

Last week, the communist regime flew 24 fighter jets toward Taiwan, one day after the island nation applied to join the Comprehensive and Progressive Agreement for Trans-Pacific Partnership (CPTPP)—a trade group that China also applied to join.

Beijing’s largest daily military incursion occurred on June 15, when the Chinese military sent 28 jets into Taiwan’s ADIZ after leaders of the Group of Seven industrialized nations issued a statement calling for a peaceful resolution of cross-Taiwan Strait issues.

Friday’s show of force was the second largest daily incursion since the 28 jets breached Taiwan’s ADIZ in June.

Beijing labels any foreign government’s engagement with Taiwan as a challenge to its sovereignty. It squeezes Taiwan’s international space, trying to isolate the Asian democracy from global groups like the World Health Organization. China also runs afoul of nations that wish to establish closer ties with Taiwan, like Lithuania and Japan, who donated vaccines to Taiwan this year.