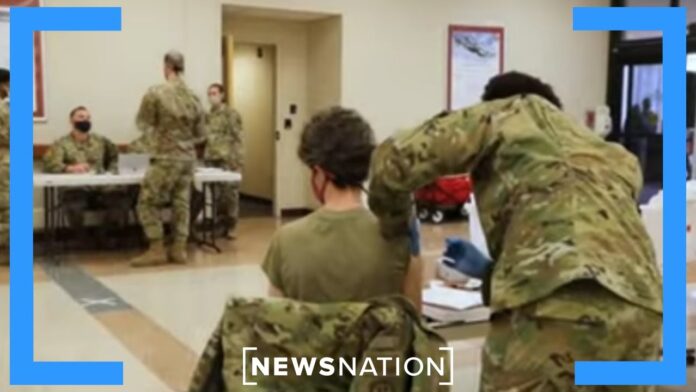 Nearly 40,000 troops in the U.S. Army National Guard who have rejected COVID-19 vaccine shots are set to face penalties after the vaccination deadline passed on Thursday at midnight.

Army National Guard and Air National Guard members were mandated by the Defense Department to be fully vaccinated by the deadlines set by each military branch. Defense Secretary Lloyd Austin warned last August that those who refuse to comply would be unable to participate in drills, get paid, or put their service days toward their retirement.

“Unless there is an approved exemption, National Guardsmen who refuse to get the shots face repercussions and consequences. This includes loss of pay or the loss of the ability to train,” the Pentagon declared in December. “Those who persist in failing to obey a lawful order face discharge.”

As of Monday, approximately 88.6 percent of the roughly 336,000-member strong Army National Guard have received at least one dose of the COVID-19 vaccine, according to the National Guard. This means more than 38,000 Guard troops have not been vaccinated and, as a result, are subject to potential expulsion.

“We’re going to give every soldier every opportunity to get vaccinated and continue their military career,” Lt. Gen. Jon Jensen, director of the Army National Guard, said in a statement. “We’re not giving up on anybody until the separation paperwork is signed and completed.”

The Pentagon has made it clear that the federal government won’t pay unvaccinated Guard members after the deadline, meaning that they won’t be paid when performing federal missions, such as certain assignments to the nation’s southern border, if they are allowed to participate at all.

That being said, unvaccinated National Guardsmen might still get paid by their states in the performance of their state-assigned duties, depending on the state.

For example, in Texas, Republican Gov. Greg Abbott explicitly ordered to not punish any Texan Guardsman for refusing the COVID-19 vaccine, adding that as long as he remains the commander-in-chief of the Texas National Guard, the federal government can’t bypass him to “control, punish, or discharge Texas’ Guardsmen.”