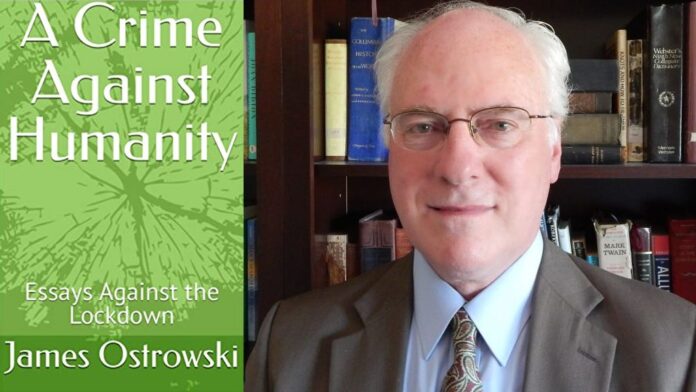 In a series of bold essays, James Ostrowski, an early and vociferous opponent of the Lockdown, makes the case for the Lockdown as a crime against humanity in all its permutations.

James Ostrowski is a trial and appellate lawyer and author from Buffalo, New York. He graduated from St. Joseph’s Collegiate Institute in 1975 and obtained a degree in philosophy from the State University of New York at Buffalo in 1980. He graduated from Brooklyn Law School in 1983. In law school, he was writing assistant to Dean David G. Trager, later a federal judge in the Eastern District of New York. He was a member of the Moot Court Honor Society and the International Law Moot Court Team.

He served as vice-chairman of the law reform committee of the New York County Lawyers Association (1986-88) and wrote two widely quoted reports critical of the law enforcement approach to the drug problem. He was chair of the human rights committee, Erie County Bar Association (1997-1999). He has written a number of scholarly articles on the law on subjects ranging from drug policy to the commerce clause of the constitution.

His articles have appeared in the Wall Street Journal, Buffalo News, Cleveland Plain Dealer and Legislative Gazette. His policy studies have been published by the Hoover Institution, the Ludwig von Mises Institute, and the Cato Institute in Washington, D.C. His articles have been used as course materials at numerous colleges including Brown, Rutgers and Stanford.

He is the author of Political Class Dismissed (2004), Government Schools Are Bad for Your Kids (2009) and Direct Citizen Action (2010). Presently, he is an adjunct scholar at the Ludwig von Mises Institute and a columnist for LewRockwell.com.

He and his wife Amy live in North Buffalo with their two children, Anna and Will. He is a long-time youth baseball and basketball coach.