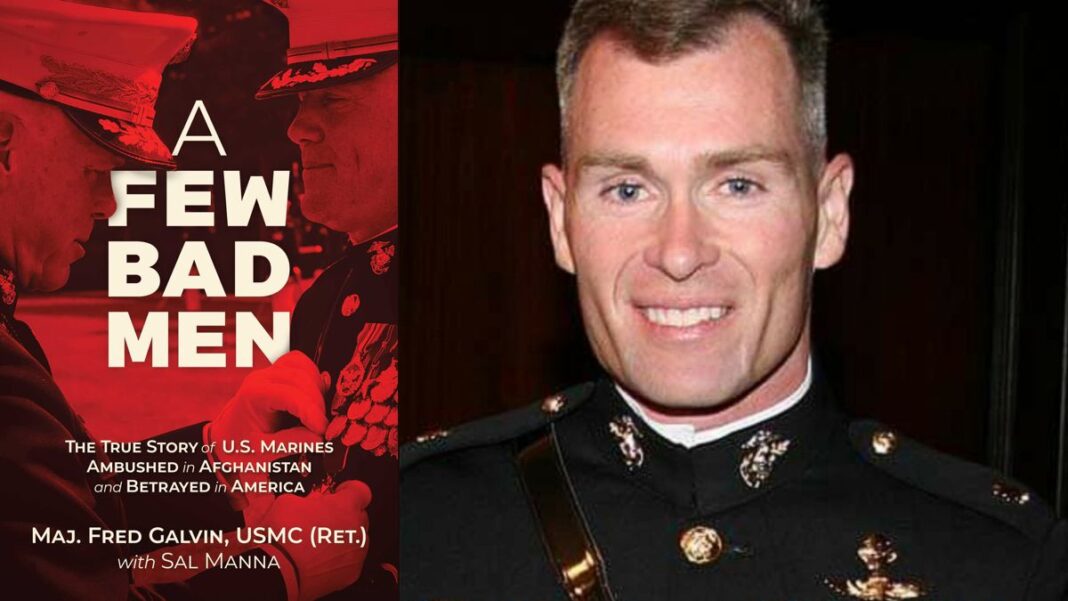 A Few Bad Men is the incredible true story of an elite team of U.S. Marines set up to take the fall for Afghanistan war crimes they did not commit—and their leader who fought for the redemption of his men.

Ambushed in Afghanistan and betrayed by their own leaders—these elite Marines fought for their lives again, back home.

A cross between A Few Good Men and American Sniper, this is the true story of an elite Marine special operations unit bombed by an IED and shot at during an Afghanistan ambush. The Marine Commandos were falsely accused of gunning down innocent Afghan civilians following the ambush. The unit’s leader, Maj. Fred Galvin, was summarily relieved of duty and his unit was booted from the combat zone. They were condemned by everyone, from the Afghan president to American generals. When Fox Company returned to America, Galvin and his captain were the targets of the first Court of Inquiry in the Marines in fifty years.

“Fred Galvin is the real deal. His dramatic retelling of his experience as commander of Fox Company reads like a thriller, full of twists and turns, filled with unassuming heroes and deceitful villains.” — Rob Lorenz, Producer/Director, American Sniper, Flags of Our Fathers, Letters from Iwo Jima, Mystic River, The Marksman

“This book is a must-read for every American who wants to know why, after twenty long years in Afghanistan, we did not win.” — Jessie Jane Duff, USMC, Analyst, CNN and FOX

“An incredible account and history of the fighting spirit of the ‘Marine Raiders’ under fire and the relentless fourteen-year campaign by their leader to clear their names.” — Maj. Gen. Paul Vallely, U.S. Army (Ret.), Deputy Commander, U.S. Pacific Command

“Among the many impressive military men and women I’ve met while producing such films as American Sniper and Flags of Our Fathers, Fred Galvin stands out as one of the most remarkable. Intelligent, honorable, and with an extraordinary list of accomplishments as a Marine, he is the real deal. His dramatic retelling of his experience as commander of Fox Company reads like a thriller—full of twists and turns—filled with unassuming heroes and deceitful villains. In dogged pursuit of justice for his Marines, Fred Galvin exemplifies the very essence of leadership and Corps Values.” — Rob Lorenz, Producer and Director for films including Letters from Iwo Jima, American Sniper, Flags of Our Fathers, Mystic River, Trouble with the Curve, The Marksman, and Grand Torino

“Fred Galvin’s story is a page turner that reads like the fanciful plot of an A-list Hollywood movie. It’s an extraordinary cliffhanger that deserves attention, and shows just how dangerous ‘fake news’ can be, when no one is willing to stand up for the truth. This is a cautionary tale that should be read by all who are interested in politics, war stories, courtroom drama, and international affairs as this new world we’re living in, where simple lies are being propagated as the truth, is sadly not one that is going away anytime soon.” — David Jung, Screenwriter and Director of films including Roam, The Possession of Michael King and Genre Summit

“A Few Bad Men reveals how the U.S. military, desperate to protect its public image at all costs, sometimes sacrifices the honor of men in combat. The country’s first Marine special operations unit was falsely accused of killing Afghan civilians, then subjected to years of lies and deceit by top generals. The unit and its commander, retired Maj. Fred Galvin, were ultimately cleared of any wrongdoing, but not before their careers were ruined and their honor stained.” — David Zucchino, Journalist covering the 2008 MARSOC Court of Inquiry for The Los Angeles Times

“This book is a must read for every American who wants to know why, after twenty long years in Afghanistan, we did not win. This is a story how a small group of U.S. Marines counter-attacked multiple teams of deadly Taliban fighters during a complex enemy attack. These Marines were unfairly tried by a government-led prosecution who imposed a gag order and barred the press from most of the trial involving a deadly gun battle against a ruthless enemy. It’s abundantly clear that good Marines were expediently sacrificed to advance the careers of senior officers. In these conditions, as their own top brass turned against them, what incentive was there for the best trained warriors in the world to win?” — Jessie Jane Duff, retired U.S. Marine Gunnery Sergeant, Combat veteran, and Political Analyst for CNN and Fox News

“We take for granted that our American heroes will be supported by their own country when sent off to war. In A Few Bad Men, Maj. Fred Galvin, USMC (Ret.), and Sal Manna detail the painful story of these seven heroes who, when their honor and freedom were on the line, found themselves abandoned by those they counted on most. It reads like a Hollywood blockbuster but, as Galvin tells in personal detail, it was sadly true. It’s a story I was proud to report for local news in Los Angeles, and it’s now a story every American should read for themselves.” — Jory Rand, television anchor with ABC-7 in Los Angeles where he covered the MARSOC 7 case for three years

“Pennsylvania Avenue is ‘paved in politics’ from Capitol Hill to The White House. But Fred Galvin has written a real page turner, that demonstrates how politics permeates The Pentagon and posts abroad…even for Marines who come under hostile fire on the battlefield—and off. I highly recommend this book.” — J.D. Hayworth, former member of the U.S. House of Representatives for Arizona’s 5th District, television and radio show host

“When Marine Special Operations Commander Maj. Fred Galvin went to Afghanistan, he knew, in his own words, that the fighting there was, ‘violent, uncertain, complex, and ambiguous.’ In 2007, when he and his company survived a massive Taliban ambush, Galvin felt successful. But a day later a Taliban-orchestrated disinformation campaign alleging war crimes—swallowed hook, line, and sinker by Galvin’s Marine superiors—resulted in an abuse of the military justice system that lasted until Galvin and his Marines were vindicated in 2019. A Few Bad Men is a must-read story of valor, betrayal, and keeping the Marines’ honor clean.” — Jed Babbin, former U.S. Air Force Staff Judge Advocate

“I appreciate the initiative when Patriots write about our military heroes. This book is an incredible account and history of the fighting spirit of the ‘Marine Raiders’ under fire and the relentless fourteen-year campaign by their leader to clear their names and, ‘keep their honor clean.’ Many thanks to Fred Galvin for enlightening us!” — Major General Paul Vallely, U.S. Army (Ret.) former Deputy Commander of the U.S. Pacific Command

“Simply put, A Few Bad Men captures the difficult nature of raising young men to fight our complex wars—from diverse backgrounds, cultures, and political beliefs—while expecting perfection and good decision making, while under fire, in such a short time. A Few Bad Men additionally illustrates the importance of proper training, leadership, and complete trust in the men and women on the ground fighting on the front lines. This book also shows us how big of a mistake it is to allow politics to get involved during investigations while some are chasing careers at any cost, and that there should be a separation between politics and war fighters to keep those actions that are distinctly different apart, and allow both sides to properly and honestly conduct their jobs. Major Galvin captures this well and explores the thoughts behind rushed judgments, politics, and those on the ground simply doing their jobs the best they can.” — Sergeant Major Tom Satterly, U.S. Army (Ret.) former Command Sergeant Major of a Joint Special Operations Unit, Combat veteran, Author, Co-founder and Co-CEO of All Secure Foundation

“A Few Bad Men is a journey into the mindscape of the warfighter, fought first on the battlefield, then in the court of opinion, where politicians and Monday morning quarterbacks rule. I believe that ‘the use of force produces many effects, not all of which can be foreseen.’ This book is a powerful depiction of combat and a battle for justice and vindication. A must-read.” — Jason Van Camp, former U.S. Army Special Forces Operational Detachment A-Team leader, Combat veteran, Executive Director― Warrior Rising, and bestselling author

“Major Galvin epitomizes ‘no better friend, no worse enemy.’ This book should be required reading for the next generation of leaders who want a real-world lesson in honor, courage, and commitment from the first commander in modern Marine Raider history.” — Nick Coffman, Journalist covering the MARSOC 7 case since 2015 for Special Operations Forces Report (SOFREP); Served in the Marine Corps in Iraq as a Sergeant

“When America sends her Marines to war, we expect that our country will be as faithful to us as we are to our country; that our political and military leaders—those responsible for sending us to war—will have our backs; that we will always receive the benefit of doubt, especially in a war that we have been fighting for more than twenty years now—a war our political and military leaders seem unwilling to win, yet unable to leave. We sleep safely in our beds at night only because rough men stand ready to visit violence on those who would harm us. Major Fred Galvin is, and always will be, a Marine’s Marine; driven, focused, and totally committed to mission and his Marines. Someone our political and military leaders should be humbled by, or at the very least faithful to—always.” — Perry Puccetti, retired Marine Corps AH-1W Cobra attack helicopter pilot, current Executive Director of VMLY&R a subsidiary of WPP plc, (NASDAQ: WPPGY)

“A Few Bad Men is a blistering, top-to-bottom critique of how senior Marine Corps leaders (and the institution itself) completely mishandled a situation in which members of a Marine Raider unit were falsely accused of war crimes. I found myself unconsciously squirming in my chair as I read Galvin’s litany of shocking examples of failed leadership and unethical behavior by senior officers that illustrate the undeniable fact that he and his men were not only abandoned by the Marine Corps, but were subjected to a politically expedient ‘witch hunt’ that in some ways, continues to this day. I am hopeful that current Marine Corps leaders will publicly acknowledge the innocence of the MARSOC 7, and apologize for the grave injustices these brave Marines had to endure.” — Michael Ettore, retired Marine Corps Infantryman, Drill Instructor, Infantry officer, combat veteran, author, and retired from Kfor (NASDAQ:KFRC) serving in various C-level roles including: Director – Leadership Development Program, VP of Operations, CIO, and Chief Services Officer

Fred Galvin served twenty-seven years in the U.S. Marine Corps, beginning as a seventeen-year-old who rose from the enlisted ranks to become an officer. Serving in Afghanistan, Iraq, Kuwait, and elsewhere, he led the first special operations company in the Marines and earned forty-nine military medals and ribbons, including the Bronze Star. Following his retirement, he became a business entrepreneur, nonprofit executive director aiding families of service members killed in action, and a consultant to the Marine Corps, coordinating activities in the areas of cyberspace, electronic warfare, and psychological operations.

Sal Manna is a journalist, author, and historian who has written for magazines such as Time, Playboy, and Los Angeles, and newspapers such as the Los Angeles Times and Boston Herald. He has also co-authored the memoirs The King of Sting: The Amazing True Story of a Modern American Outlaw and Dyno-O-Mite: Good Times, Bad Times, Our Times.