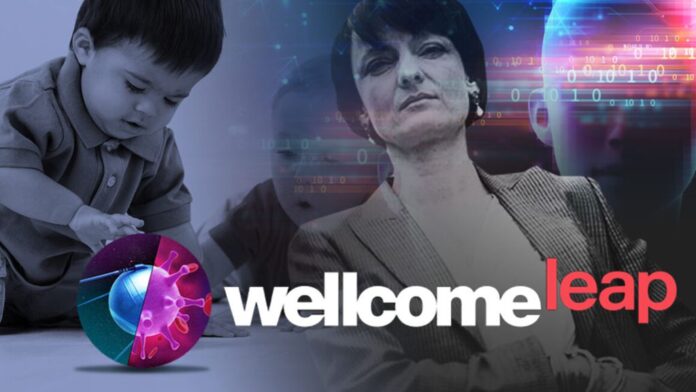 The world’s richest medical research foundation, the Wellcome Trust, has teamed up with a pair of former DARPA directors who built Silicon Valley’s skunkworks to usher in an age of nightmarish surveillance, including for babies as young as three months old. Their agenda can only advance if we allow it.

The Wellcome Trust, which has arguably been second only to Bill Gates in its ability to influence events during the COVID-19 crisis and vaccination campaign, launched its own global equivalent of the Pentagon’s secretive research agency last year, officially to combat the “most pressing health challenges of our time.” Though first conceived of in 2018, this particular Wellcome Trust initiative was spun off from the Trust last May with $300 million in initial funding. It quickly attracted two former DARPA executives, who had previously served in the upper echelons of Silicon Valley, to manage and plan its portfolio of projects.

This global health DARPA, known as Wellcome Leap, seeks to achieve “breakthrough scientific and technological solutions” by or before 2030, with a focus on “complex global health challenges.” The Wellcome Trust is open about how Wellcome Leap will apply the approaches of Silicon Valley and venture capital firms to the health and life science sector. Unsurprisingly, their three current programs are poised to develop incredibly invasive tech-focused, and in some cases overtly transhumanist, medical technologies, including a program exclusively focused on using artificial intelligence (AI), mobile sensors, and wearable brain-mapping tech for children three years old and younger.

This Unlimited Hangout investigation explores not only the four current programs of Wellcome Leap but also the people behind it. The resulting picture is of an incredibly sinister project that poses not only a great threat to current society but to the future of humanity itself. An upcoming Unlimited Hangout investigation will examine the history of the Wellcome Trust along with its role in recent and current events.