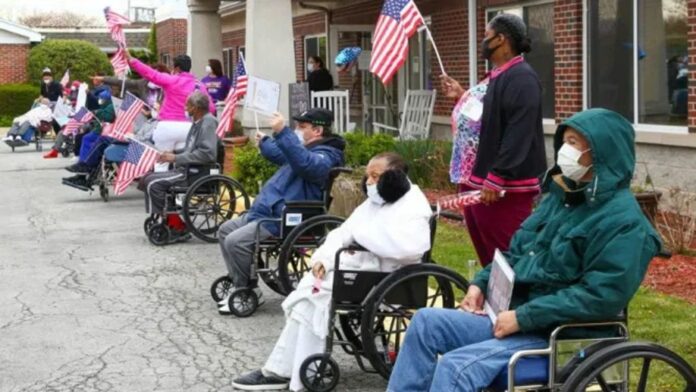 From the moment America first heard the alarms of the Wuhan Flu, the nation divided into two starkly different responses to it, based not on disease awareness or any other biological trait, but on politics. Those on the right sought to take appropriate actions to mitigate the risk and save lives, while maintaining as much normalcy across the land as possible. For leftists however, the prospect of a horrific crisis was instantly met with jubilation, as they perceived the opportunity to exploit all of the fear and suffering to great political advantage.

In the process, it became inescapably evident that leftist Democrats were perfectly willing to let innocent people get sick and die needlessly, if that horror and death would translate into political advantage for them. Such an assessment may sound harsh, but it is quantifiably provable and true. The pattern has been clear from the moment word of the virus reached the American people.

The despicable and criminal abuses of seniors in New York will stand among the darkest episodes in American history, once the truth is told. Leftist Democrat Governor Andrew Cuomo engaged in nothing short of their premeditated slaughter, by forcing Covid positive patients into nursing homes, where they could readily spread the disease among the most vulnerable and helpless. Death rates there actually did skyrocket, yet leftist Democrats and their Fake News minions merely deflected Cuomo’s criminal culpability by making their standard accusations that the carnage was all somehow President Trump’s fault.

Next came the indefensible leftist Democrat war on Hydroxycloroquine (HCQ), a decades old medication with a great track record of extremely low risk use. When statistical research showed that Covid deaths were markedly lower in regions of the world where the drug was widely used for Malaria, doctors quickly put “two and two” together and began administering HCQ to severe Covid patients, with stunningly positive results. But rather than celebrating the hope and promise such an effective treatment (leftists reflexively abhor any hope and promise that doesn’t entirely focus on them), Democrat politicians and their media parakeets loudly condemned the use of the drug, in an obviously coordinated and malignant effort to fan flames of fear and mistrust over its use.

Even more abhorrently and transparently, leftist Democrat governors began issuing edicts threatening legal action against doctors and pharmacists who prescribed HCQ. After months of still more needless deaths, the “genie” could no longer be kept in the bottle, and it was finally conceded that the drug works. Lives could have been saved enmasse. But that would have severely deflated the leftist Democrat campaign of fear.

It is infuriatingly obvious that the last thing leftist Democrats want is for America to return to normalcy until after November, when they hope all of their abominable actions will have the desired effect of scaring Americans back into their camp, so they can win the presidential election and complete their intended takeover of the nation. The “problem,” from their sick, twisted perspective, is that not nearly enough people are suffering and dying. So they are compelled to create as much of an illusion of continuing disaster as possible. And that is the real goal of all their clamoring about the “need” for masks.

Even as states are opening back up and attempting to return to normal, death rates are below what they were as far back as April. Meanwhile, we have all heard those reports of the thoroughly contrived “spikes” in “reported” Florida Covid cases, intended to create the image that Governor Ron DeSantis is somehow culpable for the supposed spread of the disease. With more than three hundred “medical” facilities (so far) having been caught in blatant fraud, as they report up to 100% of those tested as “positive,” it is undeniable that the real statistics are drastically lower, and hence not as politically beneficial to the party of fear and lies. Issuing such phony claims is tantamount to shouting “Fire!” in a crowded theater. Every perpetrator and collaborator (including those peddling the Fake News), should be held accountable for the real damage they are inflicting on a panicked population.

Here in the heartland, the reality of the virus is what those on our side suspected from the beginning. It is hardly the Twenty-First Century “Black Plague,” aside from all of the superstition being peddled in its name, almost exclusively from leftists of course. Still, their need to wield it as a political weapon thoroughly supplants any consideration for the plight of fellow citizens, so the fear mongering continues unabated.

Leftist Democrats are now staking the entirety of their political futures over the subject of masks. Once again, they are in a dangerously weak position, and can only succeed if those on the right retreat from the battle and allow a leftist victory. The masks are not about health or safety, but are only ineffectual symbols of leftist “virtue.” It is no coincidence that those who vehemently demand that Americans wear them just happen to be the same ones who were belligerent in their opposition to HCQ. It will be a tragedy for the nation if they prevail.

Even the medical experts invoked by the left have had to admit that the paper masks are only intended to filter out pollen and dust. They are at most, 30% effective at preventing the spread of the virus, which of course equates to being 70% ineffective. Cloth masks are even worse, at 10% effective (90% ineffective, obviously).

But both are 100% effective in the real mission for which the left intends them, which is to create the visual impression for Americans, every time they go out in public, that a looming and deadly enemy lurks, and may strike them dead if they don’t cede their rights and freedoms to the state and silently comply.

This environment of fear has real, quantifiable consequences which are being deliberately ignored, because they “complicate” the leftist Democrat narrative. Despite the lack of bodies in the streets, Americans are being made to feel they are in a fearful “lockdown” every time they go into any public venue where masks are required. Rates of depression, drug abuse, and suicide have spiked severely, and in many locales are exceeding death rates from the virus (even including all of the fraudulent “cooked” numbers).

Americans must decide whether they intend to break out of this mire of hopelessness and fear that leftist Democrats have created for them, or if they are willing to accept the ugliness of it as their future. Victory over the left starts with standing up to all of the lies and fraud. Most importantly, it requires holding every purveyor of fear accountable, from the highest office holders in the land, to local municipalities with their pint-sized tinhorn wannabes who issue unconscionable edicts, intended to cow and subjugate the American people.