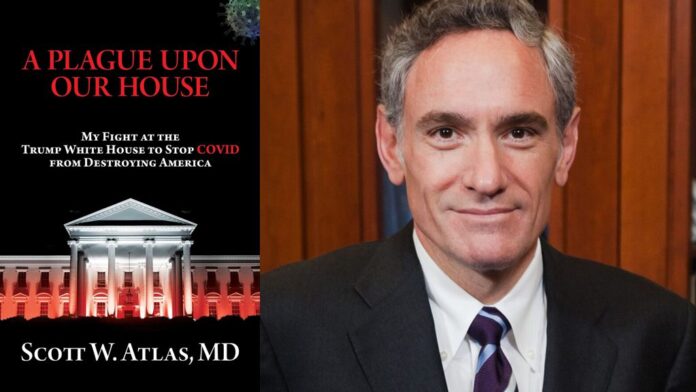 As seen on Tucker Carlson, The Ingraham Angle, The Megyn Kelly Show, The Clay Travis & Buck Sexton Show, The Next Revolution with Steve Hilton and more!

What really happened behind the scenes at the Trump White House during the COVID pandemic?

When Dr. Scott W. Atlas was tapped by Donald Trump to join his COVID Task Force, he was immediately thrust into a maelstrom of scientific disputes, policy debates, raging egos, politically motivated lies, and cynical media manipulation. Numerous myths and distortions surround the Trump Administration’s handling of the crisis, and many pressing questions remain unanswered. Did the Trump team really bungle the response to the pandemic? Were the right decisions made about travel restrictions, lockdowns, and mask mandates? Are Drs. Anthony Fauci and Deborah Birx competent medical experts or timeserving bureaucrats? Did half a million people really die unnecessarily because of Trump’s incompetence?

So far no trusted figure has emerged who can tell the story straight—until now. In A Plague Upon Our House, an unfiltered insider account, Dr. Scott Atlas brings us directly into the White House, describes the key players in the crisis, and assigns credit and blame where it is deserved.

A Plague Upon Our House includes shocking evaluations of the Task Force members’ limited knowledge and grasp of the science of COVID and details heated discussions with Task Force members, including all of the most controversial episodes that dominated headlines for weeks. Dr. Atlas tells the truth about the science and documents the media’s relentless campaign to suffocate it, which included canceled interviews, journalists’ off-camera hostility in White House briefings, and intentional distortion of facts. He also provides an inside account of the delays and timelines involving vaccines and other treatments, evaluates the impact of the lockdowns on American public health, and indicts the relentless war on truth waged by Big Business and Big Tech.

No other book contains these revelations. Millions of people who trust Dr. Atlas will want to read this dramatic account of what really went on behind the scenes in the White House during the greatest public health crisis of the 21st century.

Dr. Atlas investigates the impact of the government and the private sector on access, quality, and pricing in health care, global trends in health care innovation, and key economic issues related to the future of technology-based medical advances. He is a frequent policy advisor to policymakers and government officials in the United States and other countries. He has served as Senior Advisor for Health Care to several numerous candidates for president, as well as counseled members of the US Congress on health care, testified before Congress, and briefed directors of key federal agencies. From July to December, 2020, he served as a Special Advisor to President Trump and as a member of the White House Coronavirus Task Force.

Before his appointment at the Hoover Institution, he was Professor and Chief of Neuroradiology at Stanford University Medical Center for fourteen years. He is the author of numerous books, including In Excellent Health: Setting the Record Straight On America’s Health Care, and most recently Restoring Quality Health Care: A Six-Point Plan for Comprehensive Reform at Lower Cost. He is also the editor of Magnetic Resonance Imaging of the Brain and Spine—the leading textbook in the field that has been translated into several languages, now in its 5th edition. His publications and interviews have appeared worldwide.

Dr. Atlas has received many awards and accolades from leading institutions and societies all over the world in recognition of his leadership in policy and medicine. He was awarded the 2021 Freedom Leadership Award, Hillsdale College’s highest honor, “in recognition of his dedication to individual freedom and the free society.” He also received the 2011 Alumni Achievement Award, the highest career achievement honor for a distinguished alumnus from the University of Illinois in Urbana-Champaign. In the private sector, Atlas is a frequent advisor to start-up entrepreneurs and companies in life sciences and medical technology. He received his MD degree from the University of Chicago School of Medicine.