Home Keep Up U.S. Capitol Breach A Time For Fighters 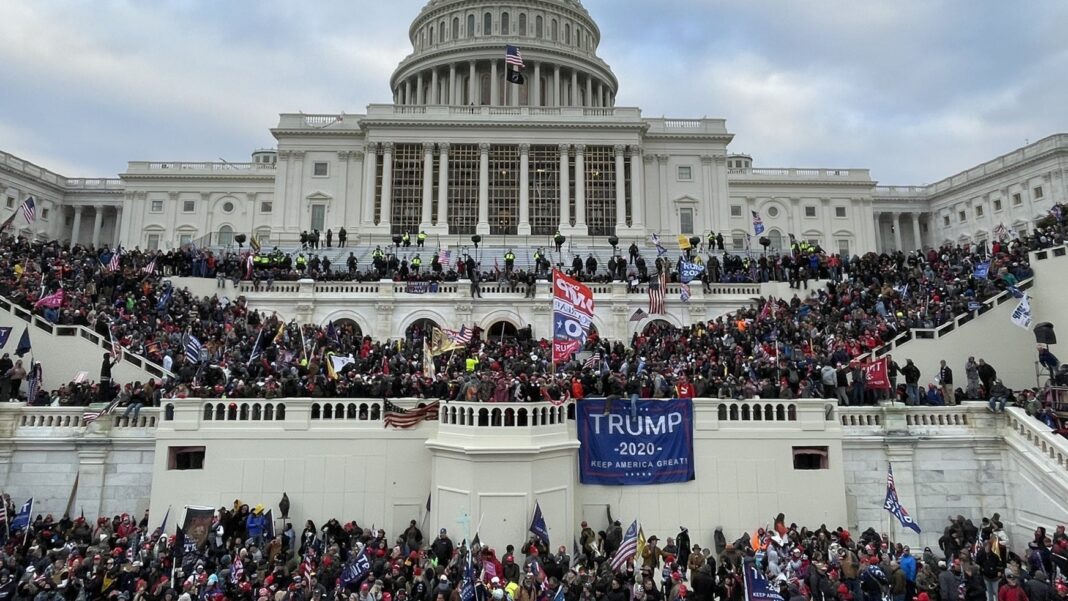 As the one year anniversary of the 2021 January 6 US Capitol Episode approaches, the left is planning an enormous commemoration. It is guaranteed that all of their moral grandstanding, fake tears, and phony patriotic sanctimony of the past twelve months will pale in comparison to Thursday’s spectacle.

The thoroughly scripted affair will include, a “prayer” vigil on the House steps (One has to wonder to who or what the party of sexual perversion and abortion might “pray”?), a panel of “historians” to publicly wail an gnash teeth (no doubt in a manner reminiscent of the professional “mourners” of ancient civilizations), member “testimonials” (Think: AOC “fearing for her life,” though it was later revealed that she wasn’t even at the Capitol), and a moment of silence on the House floor (Admittedly the most welcome portion, given the lunacy that ensues whenever they speak). But don’t expect any “moment of silence” for Ashli Babbitt, who was the only real casualty of the event, killed in cold blood by leftist Capitol Policeman Michael Leroy Byrd.

It is crucially important for our side to not only keep this agenda driven theater in perspective as nothing more than the self-serving circus that it is, but also to recognize the real motivation of these leftist Democrat antics. Otherwise, their shamelessness will once again prevail, and put us needlessly on the defensive.

For starters, the brief incursion into the Capitol by outraged Patriots, with or without FBI/Antifa orchestrated dramatization and embellishment, was hardly a defining moment in American history. It certainly was not the “mortal threat” to our Republic that the leftist Democrats attempt to characterize it as being. It was not an unspeakable crime against the people of America.

The real treason and betrayal of the Constitution were in fact going on inside the Capitol among Senate and House members as they presided over the phony “certification” of the fraudulent and stolen election of 2020. If the reality of their breach of trust remains cloaked in denial and lies, America itself will be no more. But if the facts are ever fully unmasked, it will be those members of the political “establishment” whose names go down in infamy for their total disloyalty to their oaths of office and the American people.

Yet the actualities January 6, and the leftist Democrats’ brazen melodramatics over it, reveal something of even greater significance to our side. Leftists always show us what they fear most, by those things which they attack with the greatest ferocity. What truly terrified them about last January’s protest was not the intrusion of Americans into the Capitol, many of whom were actually invited in by the Capitol Police and the FBI to create the proper “optics” for leftist propagandizing. Rather, it was the hundreds of thousands of angry American who remained outside and willingly braved the elements and Covid fear mongering to express their outrage at the illegal activities of the previous November. They represented many tens of millions more Americans across this land who share their same sentiments.

According to Washington Democrats, their media lackeys, Hollywood parakeets, and virtually every other leftist with a voice, America knew that Joe Biden had run the most successful campaign in American history, which is the only way he could have legitimately garnered the highest number of votes on record. But the enraged crowds gathering in D.C. on the 6th, and so many more across the nation, were not buying any of it. Nor should they!

So the question remains. What can Americans do about the situation in which we find ourselves? For starters, we must thoroughly grasp that we cannot continue to do what has brought to this abhorrent place. We cannot keep electing “Republicans” who mouth the party line on the campaign trail, only to waffle and eventually abandon it once they get inside the D.C. swamp. We will receive nothing different from the GOP, as long as we keep rewarding their ploy of giving occasional “lip service” to conservatism, but accepting capitulation to the leftist agenda at every key juncture.

That’s how Wyoming ended up with Liz Cheney as its sole Representative in the Congress. And while conservatives across America (and especially the good people of Wyoming) are fully aware of what a total disaster she has been, the goal now cannot be merely to boot her from the Congress, only to have a feckless “place holder” as her successor. Something very different than this GOP “Business as Usual” must occur. Real conservatives must be sent to Washington to change how things are done there.

A few Republican members of Congress are working to that end. Marjorie Taylor Greene of Georgia, Matt Gaetz of Florida, and Jim Jordan of Ohio are leading the way. Of course they are all being viciously targeted by the leftist Democrats and their media lackeys. Greene has been an unshakable conservative voice, resulting in her being censored by Twitter. Gaetz loudly warns against the dangers to all free people of a corrupted and weaponized FBI and DOJ. And Jordan is lately being attacked and maligned along with the rest of the January 6 protestors.

That is fully to be expected. In truth, it is specifically any “Republicans” who are accepted and lauded by the major media that prove themselves to be wholly unfit for the battle at hand. Their appeal “across the aisle” is just another way of saying they aid and abet the leftist agenda. Every one of them should be in the crosshairs for replacement, next time they are up for a vote.

Outside of the Beltway sewer, several Republican Governors across America are showing how this battle for our Nation must be fought. Leading the charge is Ron DeSantis of Florida, who is outspoken in his advocacy of the rights of the people of his state to be free of illegal and unconstitutional federal power grabs. Greg Abbott of Texas is building a border wall, despite federal efforts to destroy border security in a quest to overwhelm America with a flood of “undocumented Democrats” from Mexico and Central America.

President Trump’s single greatest achievement of his first term was not his phenomenal foreign policy victories, improvements in America’s manufacturing base, nor its economy. And it certainly wasn’t “Operation Warp Speed.” Rather, it was his unmasking of the rampant RINO treachery that has betrayed and crippled real conservatism for too many years. Only when “We the People” take up that torch, and use our awareness to clean house in the GOP by booting RINO invertebrates and replacing them with genuine conservative fighters, can the leftist onslaught from Washington be properly confronted and defeated.