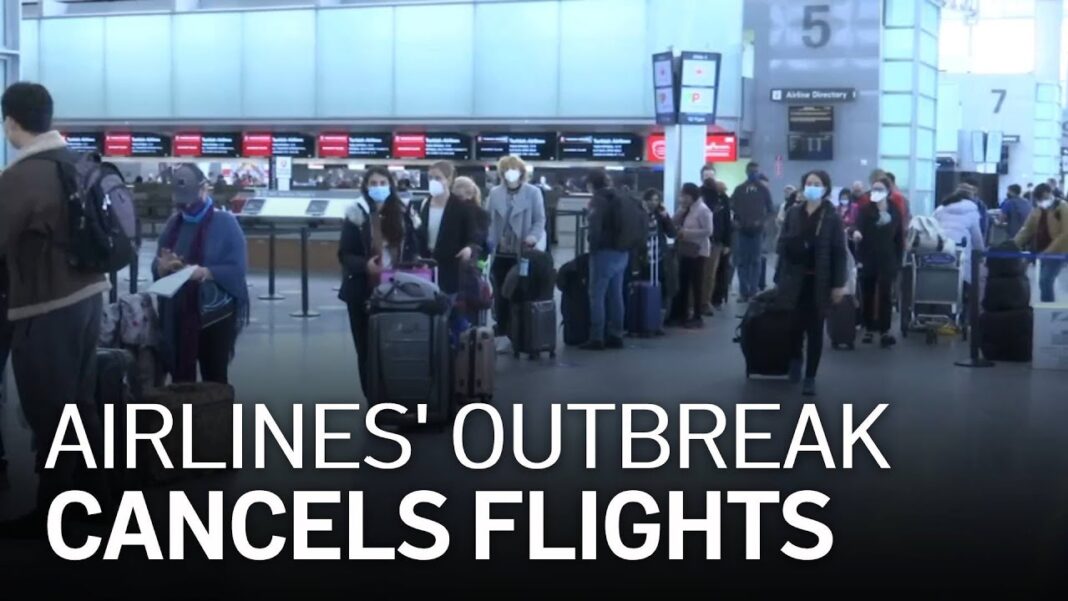 Airlines across the United States continued to cancel hundreds of Christmas holiday flights on Sunday amid the nationwide surge in Omicron cases which has also impacted employees and flight crew.

Delta Air Lines, United Airlines, American Airlines, JetBlue Airways, and Alaska Airlines are all reported hundreds of canceled or delayed flights at a time when more than 109 million Americans are expected to travel 50 miles or more via airplanes and other forms of transportation to visit friends and family between Dec. 23 and Jan. 2.

As of Sunday, 189 Delta Air Lines flights were canceled, and 881 were delayed, according to flight-tracking website, Flight Aware. United Airlines has had 118 flight cancelations and 613 delays. JetBlue canceled 132 flights on Sunday, while 527 were delayed. Meanwhile, Alaska Airlines canceled 196 flights and delayed 249.

On Christmas Day, airlines canceled a total of 957 flights, including domestic and international flights while nearly 2,000 flights were delayed, according to the tracking website. A day prior on Christmas Eve, 690 were scrapped.

According to the American Automobile Association (AAA) the figure of more than 109 million Americans that are expected to travel this holiday season represents an almost 34 percent increase from 2020. It was anticipated that a total of 27.7 million more people were set to travel this year compared to last year, bringing those numbers to pre-pandemic levels.

However, the highly transmissible Omicron variant of the CCP (Chinese Communist Party) virus has led to a sharp increase in COVID-19 infections, which airlines have said has directly impacted employees and flight crew.

“As a result, we’ve unfortunately had to cancel some flights and are notifying impacted customers in advance of them coming to the airport,” a spokesperson from United Airlines told ABC News last week. “We’re sorry for the disruption and are working hard to rebook as many people as possible and get them on their way for the holidays,” the airline added.

Meanwhile, Delta Air Lines said in a statement that the “flight cancellations are due to a combination of issues, including but not limited to, potential inclement weather in some areas and the impact of the Omicron variant.”

On top of increasing infections among airline staff, some major carriers have in recent weeks seen employees terminated due to  COVID-19 vaccine mandates.

Last week, the head of the Centers for Disease Control and Prevention (CDC) said the Omicron variant accounts for more than 90 percent of COVID-19 cases in the South, Midwest, eastern Atlantic states, and northern Pacific regions of the United States.

Dr. Anthony Fauci told ABC’s This Week on Sunday that the last weekly average was about 150,000 cases, adding, “we don’t want to get complacent” because “when you have such a high volume of new infections, it might override a real diminution in severity.”