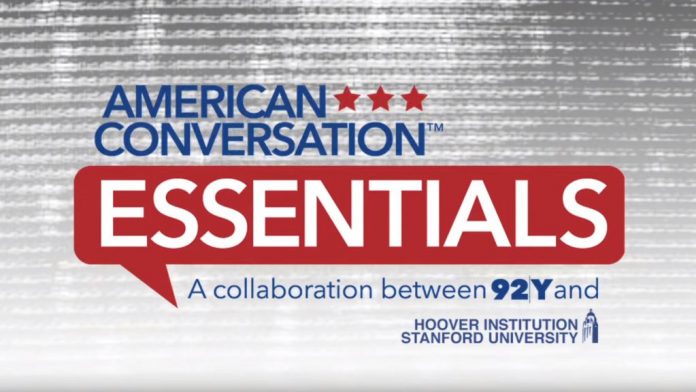 American Conversation Essentials is brought to you by The Hoover Institution which encourages discussions, generate ideas, and disseminate information, which will help secure and safeguard peace, improve the human condition, and limit government intrusion into the lives of individuals.

As part of our ongoing partnership with the Hoover Institution at Stanford University, we spoke with former Secretary of State George P. Shultz, Distinguished Fellow and Chair of the Energy Policy Task Force at Hoover, about the changing international landscape and America’s role in it. Shultz points out that in the wake of two world wars, the United States took the lead in building an economic and security commons that benefited the whole world. Now that commons is eroding. The world is less orderly. He says we are on the cusp of two very important revolutions:

1. Fracking: Technology has opened up natural gas reserves and crude oil reserves in the US which will be a boon to our economy and security.
2. Research & Development: A significant number of first-class scientists and engineers are working on alternative energy.

If we keep fueling these two revolutions, we will rebuild the commons we fought so hard for after the world wars.

In this fourth video produced in conjunction with New York City’s 92nd Street Y, Condoleezza Rice, the Thomas and Barbara Stephenson Senior Fellow on Public Policy at the Hoover Institution, describes what makes the Unites States great and how we can hit those high notes again. Rice, “America is the most successful economic and political experiment in human history.” She also notes the US needs to continue to be the place where human potential reaches its greatest heights. We need to welcome immigrants and help those who are here with education, unity, opportunities, ideas, and ideals. Rice notes that focusing on education is key to the US remaining a leader because the modern economy punishes those who do not have the knowledge and skills to succeed. Rice, “Education is the civil rights of our time.” She also believes that we need to get our fiscal house in order and help the private sector with lower taxes and have fewer regulations. People need to have the opportunities to succeed and the growth of the private sector is important to expanding those opportunities. People continue to come here from all over the world because America is still the land of opportunity and a beacon of hope.

In the third video produced in conjunction with New York City’s 92nd Street Y, Shelby Steele, the Robert J. and Marion E. Oster Senior Fellow, describes how the civil rights movement veered off course after its greatest achievement, the Civil Rights and Voting Rights Acts of 1965. After its initial success in securing individual freedom, the movement increasingly called for government transfer programs, which had the unintended effect of creating dependency, resentment, and an ongoing sense of victimization. Steele believes that educational achievement is the ultimate path to true equality “by merit, by performance, and by excellence.” Entitled American Conversation Essentials, the video series features Hoover senior fellows delving into a broad array of topics, from economics to national security.

Working with the 92nd Street Y (92Y) in New York City, the Hoover Institution has launched a new video series entitled American Conversation Essentials features Hoover senior fellows delving into a broad array of topics, ranging from income inequality to national security. In the first video, Senior Fellow Caroline Hoxby discusses the challenges posed by the intergenerational transfer of wealth from younger to older Americans. Under current financing mechanisms for Social Security and Medicare, benefits received by today’s seniors exceed their contribution into the system.

In this eighth video, produced in conjunction with New York City’s 92Y On Demand, Victor Davis Hanson, the Martin and Illie Anderson Senior Fellow and chair of the Military History Working Group at the Hoover Institution, explains what today’s leaders can learn from the ancient Greeks and Romans. As Hanson says, the ancients teach us why wars begin, how they proceed and how they can be ended. Although this may not prevent future conflicts, the knowledge can help mitigate the effects of war on people.

In this seventh video, produced in conjunction with New York City’s 92Y On Demand, Joshua Rauh, senior fellow at the Hoover Institution and professor of finance at the Stanford Graduate School of Business, discusses city and state pensions for public employees. Rauh notes that state and local governments budget for pensions on the basis of their assumptions about how the economy will do in the future. But that can be risky. If those assumptions are wrong, says Rauh, the next generation will end up paying twice — once for the pensions of current public employees and then again for those retiring in the future. The fix? Rauh says we need to completely change how we think about government budgeting.

In this sixth video, produced in conjunction with New York City’s 92nd Street Y, Amy Zegart, a senior fellow at the Hoover Institution, describes the disconnect between Hollywood portrayals of gaining intelligence, including torture, terrorism, and assassinations, and intelligence education. “People’s attitudes toward killing terrorists, detaining terrorists, and torturing terrorists are heavily influenced by the movies and television shows that they see,” she observes, which she thinks might account for at least some of the surge in the public approval of such behaviors since 2005. Zegart concludes that Hollywood must be more responsible in its portrayals of intelligence gathering and that academia could remedy this disconnect through research and writing for a popular audience. Entitled American Conversation Essentials, the video series features Hoover senior fellows delving into a broad array of topics, from economics to national security.