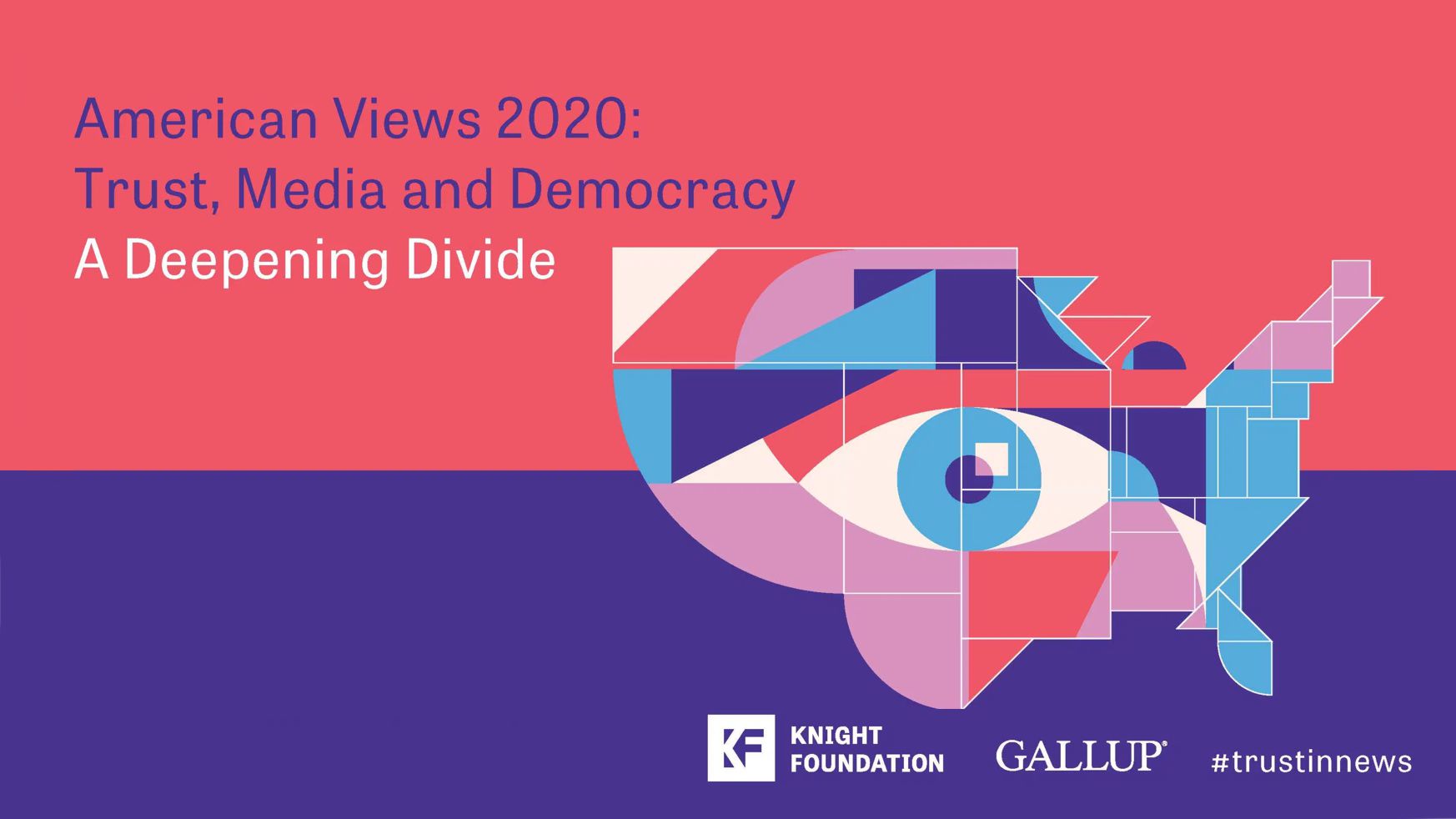 Knight Foundation believes that democracy thrives when communities are informed
and engaged.

There is a widening gulf between American aspirations for and assessments of the news media. With each passing benchmark study, the American people render deeper and increasingly polarized judgments about the news media and how well it is fulfilling its role in our democracy.

In 2018, Gallup and Knight Foundation published the inaugural American Views report as part of their Trust, Media and Democracy research program. This landmark study of Americans’ attitudes toward the news media and its role in our democracy is part of the ongoing Gallup/Knight research effort. The 2018 report found that while Americans valued the role of the news media as an important institution in a free society, they did not believe it was fulfilling its democratic roles well. Political party was the primary determining factor driving Americans’ opinions of and trust in the media.

For the 2020 American Views survey, Gallup and Knight polled more than 20,000 U.S. adults and found deepening pessimism and further partisan entrenchment about how the news media delivers on its democratic mandate for factual, trustworthy information. Many Americans feel the media’s critical role of informing and holding those in power accountable is compromised by increasing bias. As such, Americans have not only lost confidence in the ideal of an objective media, they believe news organizations actively support the partisan divide. At the same time, Americans have not lost sight of the value of news — strong majorities uphold the ideal that the news media is fundamental to a healthy democracy.

Gallup and Knight publish these sobering findings at a moment when America’s media landscape is increasingly shaped by the financial exigencies of the attention economy — and when journalism, like other democratic institutions, is growing more vulnerable to polarization and eroding trust.

As evidenced in this study, party affiliation remains the key predictor of attitudes about
the news media. Republicans express more negative sentiments on every aspect of media performance compared to Democrats and independents. Attitudes also differ by age — likely a reflection, in part, of generational differences in news consumption, as this study documents a concerning negative trend in young Americans’ opinions of the news media.

This report is based on data collected between Nov. 8, 2019, and Feb. 16, 2020, just before the novel coronavirus became a global pandemic and the burgeoning movement for racial justice swept the nation. The low levels of public trust in the nation’s polarized media environment have left open the possibility for dangerous false narratives to take root in all segments of society during these emergent crises. At a time when factual, trustworthy information is especially critical to public health and the future of our democracy, the striking trends documented in these pages are cause for concern. American Views offers new insights into how the public is responding to these challenges in their own media consumption and their thoughts about how to address them.