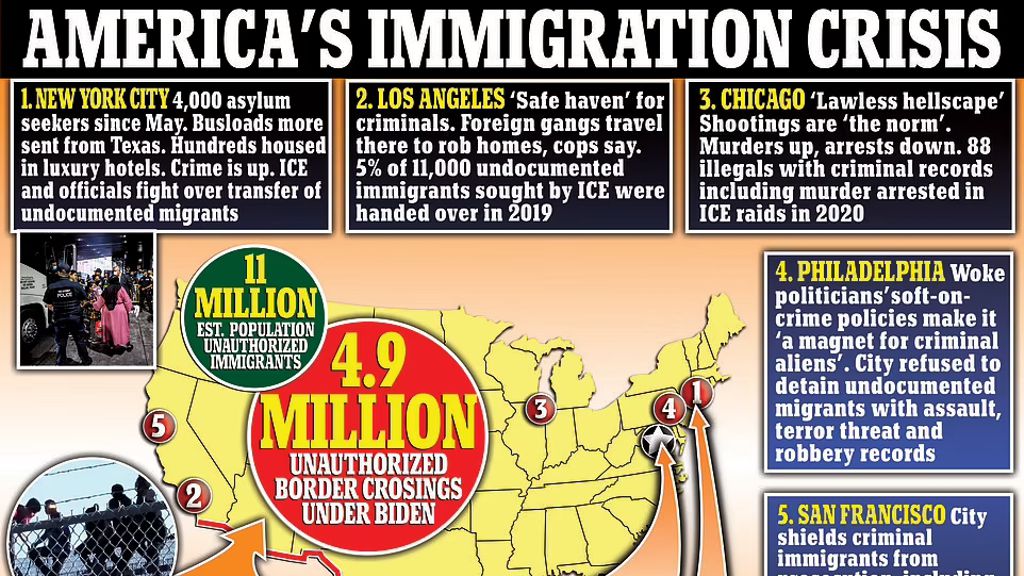 The Federation for American Immigration Reform (FAIR) says the record flow of people into the U.S. since Biden’s inauguration includes 3.4 million crossings at the southwest border and 900,000 others who slipped in there undetected.

The startling number adds to growing unease that the Biden administration is asleep at the wheel as record numbers cross the southern border, along with drugs and terror suspects, nudging a majority of Americans to conclude that this amounts to an ‘invasion’.

FAIR’s president Dan Stein said the nearly-5 million human inflow amounted to the ‘entire population of Ireland’ entering the U.S. illegally since 20 January, 2021. He accused the administration of the ‘sabotage of our nation’s immigration laws’.

Meanwhile, the Immigration Reform Law Institute (IRLI), a hawkish watchdog, has ranked New York, L.A. and Chicago as among the ‘worst’ U.S. cities for offering criminal unauthorized immigrants sanctuary from deportation and prosecution.

IRLI says New York has ‘doubled down’ on its sanctuary policies to go from second in the rankings in 2019 to top spot. Los Angeles, Chicago, Philadelphia, and San Francisco rounded out the top five.

Drone camera footage of migrants, mostly from Mexico and Central America, has put Democrats on the back foot, downplaying Biden’s policies as contributing to the record-breaking migration numbers.

Customs and Border Protection’s migrant encounter tracker for the fiscal year has crossed the 2 million mark for the first time in U.S. history. An Ipsos survey found 53 percent of people said human flows at the border amounted to an ‘invasion’.