DEL RIO, Texas—Texans living near the U.S.–Mexico border are growing increasingly frustrated with the surge in illegal crossings, human smuggling, vehicle theft, property damage, and threats from illegal aliens trespassing on their property.

Ranchers are having to brandish firearms, or even fire warning shots, to chase groups of illegal aliens, usually young men, out of their homes. Parents are afraid to let their young children play outside, while sheriffs are resigned that someone is going to get shot sooner or later.

Expecting no help from the federal government, residents are pressing for state and local action.

At least 14 counties have declared local disasters, and some are starting to prosecute illegal aliens for trespassing and other crimes, although resources are so limited that the impact will likely be small.

“The answer is send them back,” Val Verde County Judge Lewis Owens said at a border town hall in Del Rio on June 4, referring to illegal border-crossers.

“Fly them back to the point of origin. If we do that, that’s a deterrent. But we’ve got to send them back.”

Owens went on to say, however, that “we don’t have that power.”

“Texas is a sovereign state. It’s not an appendage of Washington, D.C. It has the right to defend its people and its border without permission,” he said.

Article 1, Section 10 of the Constitution states, in part: “No State shall, without the Consent of Congress … engage in War, unless actually invaded, or in such imminent Danger as will not admit of delay.”

Zadrozny said local law enforcement and state authorities “can ship these people to the other side of the river.”

“I’d actually encourage you to put a bunch of these guys in a boat, give them a couple sandwiches, and send them back across the river and see what happens. There will be no consequence,” he said. “If someone in Washington starts grumbling, dare them to come down here and have a conversation about it.” 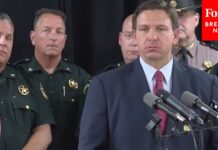 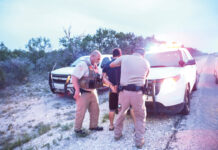 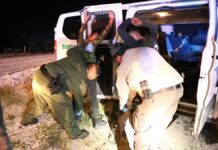