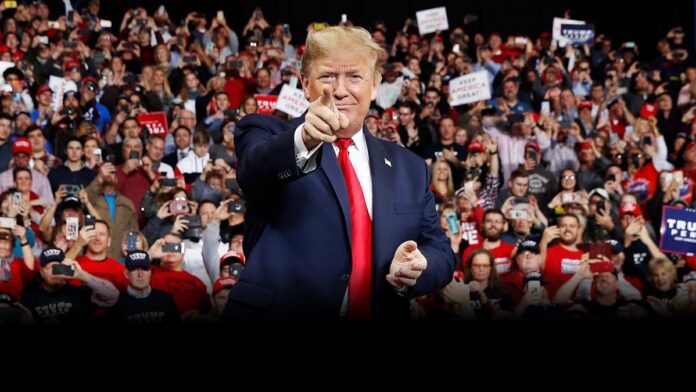 Former President Donald Trump’s first post-presidential rally is set to get underway Saturday evening in Wellington, Ohio, marking a return to his signature campaign-style events that have tended to attract droves of eager supporters and fire up his base.

The rally, sponsored by the Save America movement, begins at 7 p.m. at the Lorain County Fairgrounds, with tickets required to attend and doors opening for the event at 2 p.m., according to a notice on Trump’s official website.

Some rallygoers started lining up days before Saturday’s event, reflecting the kind of enthusiasm Trump supporters have shown around prior rallies.

“It’s been crazy,” David Arredondo, chairman of the Lorain County Republican Party, told The Epoch Times about the pre-rally buzz. “People are coming in from all over the country for this. This is exciting for us.”

The Ohio event will be the first of three scheduled public appearances, followed by a trip to the U.S.-Mexico border with Texas Governor Greg Abbott on June 30 and a rally in Sarasota, Florida, on July 3.

At the Wellington rally, Trump is widely expected to take aim at President Joe Biden for his handling of immigration, the economy, and other key policy issues. Arredondo told Reuters that Trump’s focus at the rally will likely be on building support for a red wave in 2022 rather than his own possible presidential run in 2024.

“There is no doubt that the priority is to elect Republicans in 2022,” Arredondo said. “This is the start of it.”

In a recent statement, Trump’s Save America PAC said the Ohio rally would be the first of a series of events “in support of candidates and causes that further the MAGA agenda and accomplishments” of the Trump administration.

In Wellington, Trump will be promoting former White House aide Max Miller, who is running against fellow Republican and sitting Congressman Anthony Gonzalez of Ohio’s 16th District. Gonzalez was one of 10 GOP congressmen who voted to impeach Trump following the U.S. Capitol riot on Jan. 6.