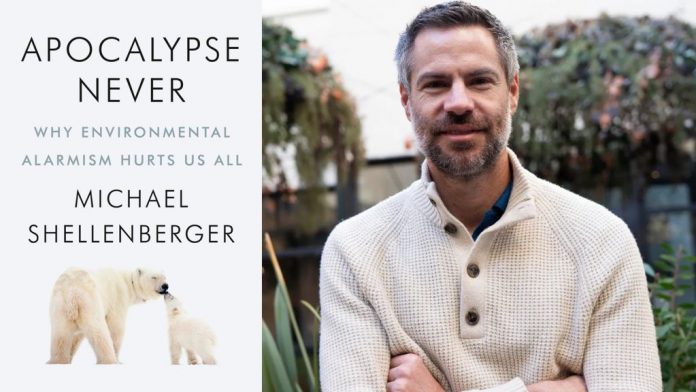 Climate change is real but it’s not the end of the world. It is not even our most serious environmental problem.

Michael Shellenberger has been fighting for a greener planet for decades. He helped save the world’s last unprotected redwoods. He co-created the predecessor to today’s Green New Deal. And he led a successful effort by climate scientists and activists to keep nuclear plants operating, preventing a spike of emissions.

But in 2019, as some claimed “billions of people are going to die,” contributing to rising anxiety, including among adolescents, Shellenberger decided that, as a lifelong environmental activist, leading energy expert, and father of a teenage daughter, he needed to speak out to separate science from fiction.

Despite decades of news media attention, many remain ignorant of basic facts. Carbon emissions peaked and have been declining in most developed nations for over a decade. Deaths from extreme weather, even in poor nations, declined 80 percent over the last four decades. And the risk of Earth warming to very high temperatures is increasingly unlikely thanks to slowing population growth and abundant natural gas.

Curiously, the people who are the most alarmist about the problems also tend to oppose the obvious solutions.

What’s really behind the rise of apocalyptic environmentalism? There are powerful financial interests. There are desires for status and power. But most of all there is a desire among supposedly secular people for transcendence. This spiritual impulse can be natural and healthy. But in preaching fear without love, and guilt without redemption, the new religion is failing to satisfy our deepest psychological and existential needs.

“Apocalypse Never is an extremely important book. Within its lively pages, Michael Shellenberger uses science and lived experience to rescue a subject drowning in misunderstanding and partisanship. His message is invigorating: if you have feared for the planet’s future, take heart.” (Richard Rhodes, winner of the Pulitzer Prize for The Making of the Atomic Bomb)

“Environmental issues are frequently confused by conflicting and often extreme views, with both sides fueled to some degree by ideological biases, ignorance and misconceptions. Michael Shellenberger’s balanced and refreshing book delves deeply into a range of environmental issues and exposes misrepresentations by scientists, one-sided distortions by environmental organizations, and biases driven by financial interests. His conclusions are supported by examples, cogent and convincing arguments, facts and source documentation. Apocalypse Never may well be the most important book on the environment ever written.” (Tom Wigley, climate scientist, University of Adelaide, former senior scientist National Center for Atmospheric Research (NCAR), and fellow, American Association for the Advancement of Science (AAAS))

“We must protect the planet, but how? Some strands of the environmental movement have locked themselves into a narrative of sin and doom that is counterproductive, anti-human, and not terribly scientific. Shellenberger advocates a more constructive environmentalism that faces our wicked problems and shows what we have to do to solve them.” (Steven Pinker, Johnstone Professor of Psychology, Harvard University, and author of Enlightenment Now)

“If there is one thing that we have learned from the coronavirus pandemic, it is that strong passions and polarized politics lead to distortions of science, bad policy, and potentially vast, needless suffering. Are we making the same mistakes with environmental policies?  I have long known Michael Shellenberger to be a bold, innovative, and nonpartisan pragmatist. He is a lover of the natural world whose main moral commitment is to figure out what will actually work to safeguard it. If you share that mission, you must read Apocalypse Never.” (Jonathan Haidt, author of Righteous Mind: Why Good People Are Divided by Politics and Religion)

“The painfully slow global response to human-caused climate change is usually blamed on the political right’s climate change denial and love affair with fossil fuels. But in this engaging and well-researched treatise, Michael Shellenberger exposes the environmental movement’s hypocrisy in painting climate change in apocalyptic terms while steadfastly working against nuclear power, the one green energy source whose implementation could feasibly avoid the worst climate risks. Disinformation from the left has replaced deception from the right as the greatest obstacle to mitigating climate change.” (Kerry Emanuel, professor of atmospheric science, MIT)

“The trouble with end-of-the-world environmental scenarios is that they hide evidence-based diagnoses and exile practical solutions. Love it or hate it, Apocalypse Never asks us to consider whether the apocalyptic headline of the day gets us any closer to a future in which nature and people prosper.” (Peter Kareiva, director of the Institute for the Environment and Sustainability, UCLA, and former chief scientist for The Nature Conservancy)

“In this tour de force of science journalism, Michael Shellenberger shows through interviews, personal experiences, vignettes, and case histories that environmental science offers paths away from hysteria and toward humanism. This superb book unpacks and explains the facts and forces behind deforestation, climate change, extinction, fracking, nature conservation, industrial agriculture, and other environmental challenges to make them amenable to improvements and solutions.” (Mark Sagoff, author of The Economy of the Earth)

“We environmentalists condemn those with antithetical views of being ignorant of science and susceptible to confirmation bias.  But too often we are guilty of the same.  Shellenberger offers ‘tough love:’ a challenge to entrenched orthodoxies and rigid, self-defeating mindsets.  Apocalypse Never serves up occasionally stinging, but always well-crafted, evidence-based points of view that will help develop the ‘mental muscle’ we need to envision and design not only a hopeful, but an attainable, future.” (Steve McCormick, former CEO, The Nature Conservancy and former President of the Gordon and Betty Moore Foundation)

“Michael Shellenberger loves the Earth too much to tolerate the conventional wisdom of environmentalism. This book, born of his passions, is a wonder: a research-driven page turner that will change how you view the world. I wish I’d been brave enough to write it, and grateful that he was.” (Andrew McAfee, Principal Research Scientist at MIT and author of More from Less)

“Will declaring a crisis save the planet? The stakes are high, but Michael Shellenberger shows that the real environmental solutions are good for people too. No one will come away from this lively, moving, and well-researched book without a deeper understanding of the very real social challenges and opportunities to making a better future in the Anthropocene.” (Erle Ellis, professor of geography and environmental systems, University of Maryland, Baltimore County, and author of Anthropocene: A Very Short Introduction)

Michael Shellenberger is a Time magazine “Hero of the Environment”; the winner of the 2008 Green Book Award from the Stevens Institute of Technology’s Center for Science Writings; and an invited expert reviewer of the next Assessment Report for the Intergovernmental Panel on Climate Change (IPCC). He has written on energy and the environment for the New York Times, the Washington Post, the Wall Street Journal, Nature Energy, and other publications for two decades. He is the founder and president of Environmental Progress, an independent, nonpartisan research organization based in Berkeley, California.

Michael Shellenberger is a Time Magazine “Hero of the Environment,” Green Book Award winner, and the founder and president of Environmental Progress. He is the best-selling author of “Apocalypse Never” and “San Fransicko” (HarperCollins, October 2021).

“Apocalypse Never is an extremely important book,” says historian Richard Rhodes, who won the Pulitzer Prize for The Making of the Atomic Bomb. “Within its lively pages, Michael Shellenberger rescues with science and lived experience a subject drowning in misunderstanding and partisanship. His message is invigorating: if you have feared for the planet’s future, take heart.”

He has been called an “environmental guru,” “climate guru,” “North America’s leading public intellectual on clean energy,” and “high priest” of the environmental humanist movement for his writings and TED talks, which have been viewed over five million times.

Shellenberger advises policymakers around the world including in the U.S., Japan, Taiwan, South Korea, the Philippines, Australia, United Kingdom, the Netherlands, and Belgium. In January 2020, Shellenberger testified before the Committee on Science, Space, and Technology of the U.S. House of Representatives.

He has been a climate and environmental activist for over 30 years. He has helped save nuclear reactors around the world, from Illinois and New York to South Korea and Taiwan, thereby preventing an increase in air pollution equivalent to adding over 24 million cars to the road.

Shellenberger was invited by the Intergovernmental Panel on Climate Change in 2019 to serve as an independent Expert Reviewer of its next Assessment Report, to be published in 2022 his most recent Congressional testimony on the state of climate science, mitigation, and adaptation.

Shellenberger is a leading environmental journalist who has broken major stories on Amazon deforestation; rising climate resilience; growing eco-anxiety; the U.S. government’s role in the fracking revolution; and climate change and California’s fires.

He also writes on housing and homelessness and has called for California to declare a state of emergency with regards to its addiction, mental health, and housing crises. He has authored widely-read articles and reports on the topic including “Why California Keeps Making Homelessness Worse,” “California in Danger.”

His articles for Forbes, The New York Times, The Wall Street Journal, and The Washington Post, and his TED talks (“How Fear of Nuclear Hurts the Environment,” “Why I Changed My Mind About Nuclear Power” and “Why Renewables Can’t Save the Planet”) have been viewed over six million times.

Shellenberger was featured in “Pandora’s Promise,” an award-winning film about environmentalists who changed their minds about nuclear, and appeared on “The Colbert Report.” He debated Ralph Nader on CNN’s “Crossfire” and Stanford University’s Mark Jacobsen at UCLA .

Shellenberger has been an environmental and social justice advocate for over 25 years. In the 1990s he helped save California’s last unprotected ancient redwood forest, and inspire Nike to improve factory conditions in Asia. In the 2000s, Michael advocated for a “new Apollo project” in clean energy, which resulted in a $150 billion public investment in clean tech between 2009 and 2015.

He lives in Berkeley, California and travels widely.