On Thursday, Republicans who control the Arizona Senate announced they plan to perform a total recount of 2.1 million ballots in the state’s highest-population county to ensure that President Joe Biden’s November win was legitimate.

Senate President Karen Fann (R) had been calling for a “full forensic audit” of Maricopa County’s election result and won a court order on February 26 granting the Senate access to the ballots and tabulation machines. Until this week, according to the Associated Press, she had never expressed that she wanted a complete recount, something Arizona law doesn’t permit except in narrow situations.

Some GOP supporters of former President Donald Trump allege there was election fraud in Arizona and other swing states that caused his 2020 loss. Fann said she wants to answer their questions one way or the other, according to the AP.

On Thursday, Fann announced that she had decided on a “preferred forensic audit team” to supervise the recount but did not disclose the firm’s name, explaining she was still hammering out the final details, according to The Arizona Mirror. 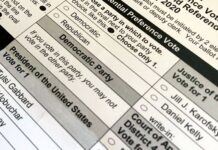