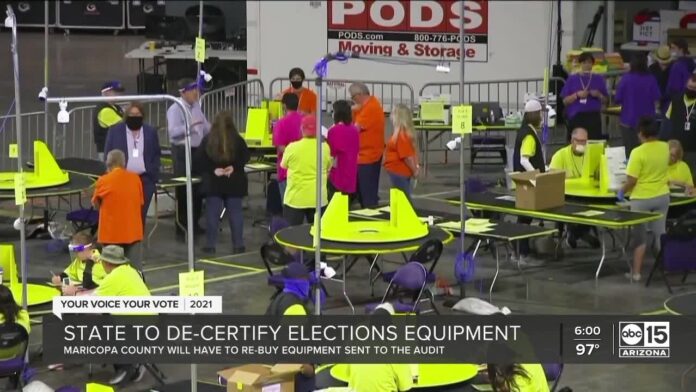 Former GOP Rep. John Shadegg will serve as the special master in the process.

The board of supervisors in Arizona’s Maricopa County, the site of a major 2020 presidential election audit, has reached an agreement with the leaders of the state’s Republican-controlled Senate ending a standoff over their demand that the supervisors hand over computer routers for use in the review.

The board announced Friday night that a special master will take questions from the Senate’s election review contractors and provide them with information contained on the routers they say they need to finish the review, according to the Associated Press.

Supervisor Bill Gates said the deal will protect sensitive information contained on the routers while avoiding a massive penalty the county faced if they had not complied, the wire service also reports.

The deal appears to put at least a temporary stop on Arizona Attorney General Mark Brnovich’s decision last month that said the county must comply with the subpoena issued by Republican Senate President Karen Fann or lose about $700 million in yearly state funding.

In addition, the county agreed to drop a $2.8 million claim it filed with the Senate after election equipment it handed over to the auditor was decertified and needed to be replaced, the wire service also reports.