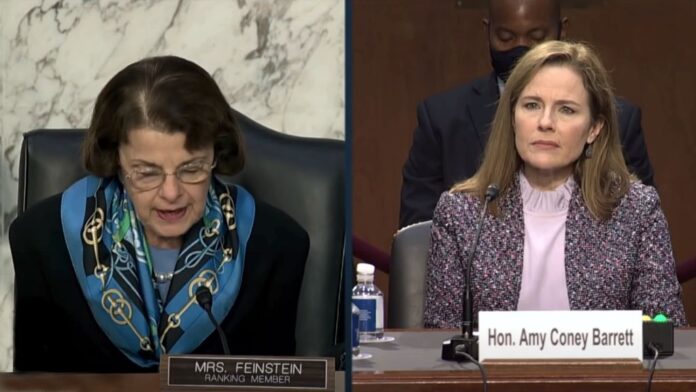 To nobody’s great surprise, leftist Democrats immediately went low and dirty in the confirmation hearings of Amy Coney Barrett, who was nominated to the Supreme Court by President Trump. With very little likelihood that Barrett can credibly be accused of some lurking scandal (the standard Democrat ploy whenever the nominee is a pro-Constitution male), Barrett’s credentials are stellar and she should sail right through to confirmation.

But of course Democrats won’t let that happen. And that is precisely why, if Senate Republican leaders expected anything different, it was foolish and naïve for them to allow the sham of confirmation hearings to ensue. By the end of the first day, the situation had already degenerated into the standard leftist Democrat circus, complete with puerile attacks and grandstanding on every possible issue, except the importance of upholding the Constitution.

With their typical brazenness, leftist Democrats seek to sway public opinion by invoking the “legacy of Ruth Ginsburg” as the appropriate basis on which to select her replacement. This sanctimonious pablum has been attempted in the past. When hard-left Senator Ted Kennedy passed in August of 2009, Democrats relentlessly insisted that the “Kennedy Seat” needed to go to another Democrat. But in every case, the real legacy is not to the anointed Democrat; it is to the greatness of the American ideal. That means properly selecting occupants for office based on the worthy structure of American government as established in our Nation’s founding documents.

It is worth recalling that fidelity to the Constitution is not only the primary duty of Supreme Court Justices, it is also the core of their sworn oath of office. Instead, what we learn from Democrats is the disgraceful nature of leftist political posturing. It is crucially important for our side to recognize that their political agenda is the only issue of importance to them. The Constitution, common decency, and even truth itself are readily discarded in service to that singular aim.

With the presidential election looming in less than a month, they see these hearings as the all important “opportunity” afforded them for their standard alarmism and phony hysterics. And it didn’t take long for them to reveal the intended focus of their fear mongering, Obamacare.

California leftists Dianne Feinstein and Kamala spearheaded the effort, with Feinstein being so shameless and brazen as to directly ask whether or not Barrett would vote to overturn Obamacare. Of course they all know that it is inappropriate to attempt to get specific judicial determinations during a Senate hearing. Those decisions should only result from the actualities of each case, as fully presented by lawyers on each side of the issue.

At least that is how it would work if all the parties involved were about the business of maintaining our Republic as intended by the Founders. However, it is at critical junctures such as this that Democrats occasionally reveal their true colors. They are not interested in the constitutionality of the law, or the scales of truly even-handed justice. Rather, they are obsessively focused on warping and contorting every aspect of government until it becomes a weapon by which they can amass unaccountable power. In ugly contrast to Barrett, Democrats knew they could count on Ginsburg to promote her ideology with each “decision” she handed down.

Both Feinstein and Harris, among others, expressed their fears that jurists on the court, with any genuine reverence for the oath to uphold the Constitution, might spell the end of the legal and medical abomination of Obamacare. So once again we are hearing the monotonously predictable leftist Democrat mantra that if Barrett is confirmed, “millions will lose their healthcare,” as if the nightmare of Obamacare has somehow transformed into a panacea for Americans with medical needs. In their world, Republicans just want to starve people, deprive them of life-saving medicine, and dance on their bodies as they collapse from neglect! We’ve heard it all before, and even among the perennially gullible, it is beginning to ring a bit hollow.

Not surprisingly, these Senate Democrats again prove their need for a ninth grade civics lesson on the proper function of American government. Even if Obamacare had any worth, it would not be the role of the Supreme Court to force its implementation. In a representative republic, that is the role of the legislative and executive branches. So in essence, all of the leftist Democrat theatrics are proof of their willingness to destroy any vestige of real representative government, in order to seize total dictatorial control over the people.

Some on the right have speculated that the real reason Republican Senate Majority Leader Mitch McConnell allowed these disingenuous hearings was to give Americans an opportunity to witness the real repulsiveness and fraud of the Democrats. In that case, they have already been a smashing success.