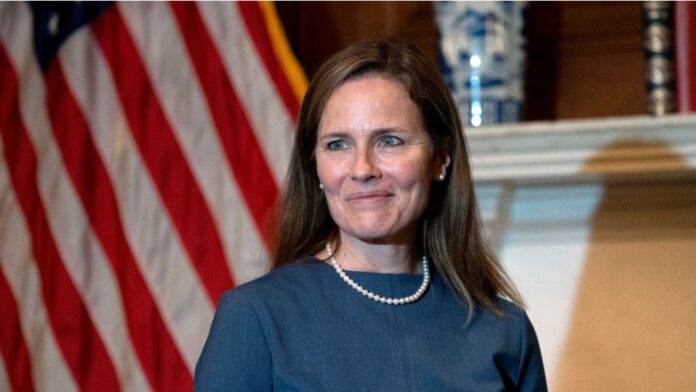 With confirmation hearings for Amy Coney Barrett still ten days away, leftist Democrats are nonetheless already on their canned and predictable rampage against her. Attacks range from the vicious to the comically insane, with a consistent undercurrent of hypocrisy and lies throughout. Of course this is all standard fare for leftist Democrats. And it will only get worse from here.

Initially, upon the breaking news of the passing leftist icon Ruth Ginsburg, Democrats engaged in panicked efforts to prevent President Trump from picking a nominee before the upcoming presidential election. This was done under the sanctimonious banner of all sorts of statesmanlike (in the leftist mindset) claims of “No Fair!” and other puerile cat-calls. Apparently, if Republican Senators were able to forestall a vote on Barack Obama’s 2016 nomination of Merrick Garland, to replace the late Antonin Scalia, Republicans should forestall President Trump’s nomination of a replacement for Ginsburg.

Absent from any discussion here were the pertinent facts. First, Obama would never nominate somebody who wasn’t a devout leftist activist. And second, in both situations the Senate has been in the hands of the Republicans. So the latest definition of leftist Democrat “fairness” is to let them and their agenda remain in control, regardless of who has the bulk of public support in the U.S. Senate, and hence the controlling number of members.

Next came the attacks on Barrett for her “religious” beliefs. Leftist Democrats were quick to assert that holding to such precepts renders her inherently unfit for the office, according to their twisted mischaracterization of the First Amendment. Yet they never cite the First Amendment itself when attempting to perpetrate this scam.

Separation of Church and State, and all of that, of course! It is noteworthy that the phrase occurs nowhere in the Constitution or Bill of Rights, but is a concocted leftist “Holy Grail” (pun intended) extracted completely out of context from a personal letter penned by Thomas Jefferson. In no way is it ever applied to the religion of Islamists, or the hostility and contempt against Christians from dogmatic leftists. Whenever leftists use the state to attack particular tenets of Christian faith, “Separation of Church and State” instantly vanishes from their vocabulary.

One of the most absurd, and telling hits on Barrett was in relation to her adoption of children from Haiti, which was deemed “White Colonization” by leftist race-baiter Ibram Kendi, who claims that Barrett loving and raising those children was “cutting their biological parents out of the picture of humanity.” In Kendi’s abominable world-view, segregation is the new show of respect for other races. Can the insanity of leftists become any more vile and debasing?

In the past, pro-aborts have sought their phony “moral high ground” by castigating pro-life Americans who insist on letting the babies be born, but who won’t care from them afterwards. Barrett has shown just such care, but of course the agenda of leftists has plenty of latitude for shameless hypocrisy.

In truth, all of these leftist proclamations are intentional distractions from their real fear, which they dare not express in blunt terms. Even their hysterical squalling that Barret might be a key vote to overturning Roe v. Wade is ultimately a secondary consideration. The real cause for their panic is that Barrett appears to be an ardent supporter of the United States Constitution.

In ugly contrast, the “jurisprudence” of every leftist Democrat appointee on the Court has been virtually 100% predictable, with the advancement of the leftist agenda being the determining factor. The integrity of the Constitution is not even a consideration, and its defining principles are never mentioned in any respect by leftists on the Court, unless they can be contorted and perverted into some version that might seem to bolster their case. Conversely, Barrett has a track record of fidelity to the Nation’s founding charter and her oath to uphold it as the ultimate framework for American law. This is deemed “poison” to the leftist goal of remaking America in the image of their failed ideology.

Despite all the lies and chicanery of the leftist Democrats, which will only ratchet up in volume and intensity until the confirmation vote, this situation represents a golden opportunity for President Trump and Senate Republicans. Each and every leftist assault on her needs to be spotlighted as just more of their battle plan to dismantle the Constitution of the United States. Let this message ring out as often as leftist Democrats are willing to resort to their underhanded grandstanding. Doing so could not only redefine the terms of this engagement, but also of every future Democrat nominee who needs to be opposed for the very same reason Barrett needs to be confirmed.

Democrats have telegraphed their intentions to make the Barrett confirmation an epic struggle for their agenda, and against the American ideal. It is a battle they cannot win, if Republicans fight them on the right terms. Bring it on!