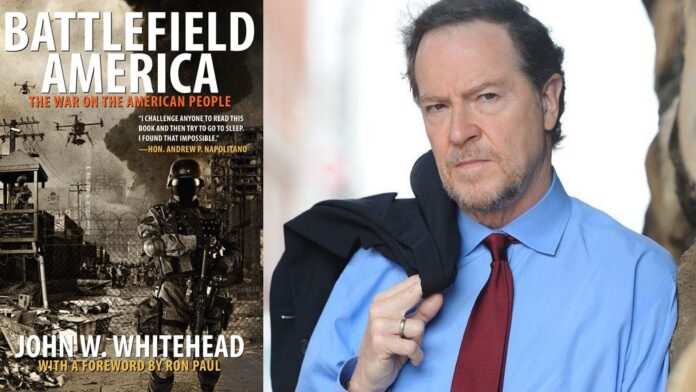 Police forces across the United States have been transformed into extensions of the military. Our towns and cities have become battlefields, and we the American people are now the enemy combatants to be spied on, tracked, frisked, and searched. For those who resist, the consequences can be a one-way trip to jail, or even death.

Battlefield America: The War on the American People is constitutional attorney John W. Whitehead’s terrifying portrait of a nation at war with itself. In exchange for safe schools and lower crime rates, we have opened the doors to militarized police, zero tolerance policies in schools, and SWAT team raids.

The insidious shift was so subtle that most of us had no idea it was happening. This follow-up to Whitehead’s award-winning A Government of Wolves, is a brutal critique of an America on the verge of destroying the very freedoms that define it. Hands up!―the police state has arrived.

John W. Whitehead is an attorney and author who has written, debated and practiced widely in the area of constitutional law and human rights. Whitehead’s concern for the persecuted and oppressed led him, in 1982, to establish The Rutherford Institute, a nonprofit civil liberties and human rights organization whose international headquarters are located in Charlottesville, Virginia. Deeply committed to protecting the constitutional freedoms of every American and the integral human rights of all people, The Rutherford Institute has emerged as a prominent leader in the national dialogue on civil liberties and human rights and a formidable champion of the Constitution. Whitehead serves as the Institute’s president and spokesperson. Widely recognized as one of the nation’s most vocal and involved civil liberties attorneys, Whitehead’s approach to civil liberties issues has earned him numerous accolades and accomplishments, including the Hungarian Medal of Freedom and the 2010 Milner S. Ball Lifetime Achievement Award for “[his] decades of difficult and important work, as well as [his] impeccable integrity in defending civil liberties for all.” As nationally syndicated columnist Nat Hentoff observed about Whitehead: “John Whitehead is not only one of the nation’s most consistent and persistent civil libertarians. He is also a remarkably perceptive illustrator of our popular culture, its insights and dangers. I often believe that John Whitehead is channeling the principles of James Madison, who would be very proud of him.” Born in 1946 in Tennessee, John W. Whitehead earned a Bachelor of Arts degree from the University of Arkansas in 1969 and a Juris Doctorate degree from the University of Arkansas School of Law in 1974. He served as an officer in the United States Army from 1969 to 1971. He lives in Charlottesville, Virginia.