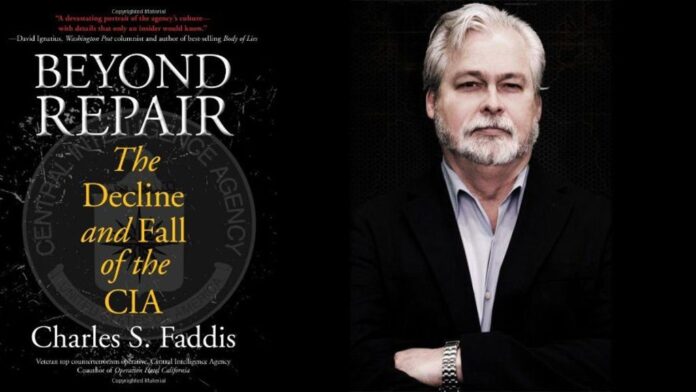 Let me start by saying what this book is not.

It is not an attack on the men and women of the Clandestine Service of the Central Intelligence Agency, the overwhelming majority of whom are dedicated, patriotic Americans working hard everyday on behalf of their fellow citizens. God knows that they do not do it for the money nor do they do it for the recognition. They do it because they believe in the work, and because they know, as I do, that there really are monsters in the world, and someone has to protect us from them.

It is also not an argument against the existence of a central human intelligence collection organization within the United States Government. We desperately needed a central intelligence agency in 1947 when the CIA was created. We even more desperately need such an entity today. The threats facing us are multiplying and becoming more complex. The time horizons in which threats are emerging are shortening. Technology is evolving at an astonishing rate, and we really are fast approaching the day when there will be dozens of groups and nations on this planet capable of threatening us with biological, chemical, radiological and nuclear weapons. This is not pulp fiction. This is reality.

Beyond Repair: The Decline and Fall of the CIA is an argument that the existing Central Intelligence Agency is no longer capable of performing the task for which it was designed and must, rapidly, be replaced.

Starred Review. Faddis (Operation Hotel California), a career CIA operations officer, pulls no punches in this provocative critique of the iconic—and dysfunctional—spy agency. Noting that the CIA was created to protect the U.S. from another Pearl Harbor, the author points to 9/11 as proof that the agency can no longer perform that task and is so beyond reform that it must be replaced. In his portrayal of the CIA, risk-taking, daring and creativity are discouraged, bureaucratic concerns are given precedence, senior leadership is lacking and morale has been sapped by crippling purges and witch hunts. The author concludes that the agency is dying a death of a thousand cuts and offers a blueprint for a new OSS, modeled on the legendary Office of Strategic Services, FDR’s WWII spy agency that spawned the CIA. Keep this new organization, like its wartime predecessor, small, flat and elite, he cautions, and use it sparingly. In a world where threats are multiplying and becoming more complex, Faddis’s bleak assessment of the CIA should be required reading. (Nov.)
Copyright © Reed Business Information, a division of Reed Elsevier Inc. All rights reserved.

“Faddis describes the agency as rife with incompetence at every level.”
―New York Times

“Faddis, a career CIA operations officer, pulls no punches in this provocative critique of the iconic and dysfunctional spy agency. . . . In a world where threats are multiplying and becoming more complex, [his] bleak assessment of the CIA should be required reading.”

“If you want to know what’s wrong with today’s CIA―and how to fix it―
this book is the place to start. Sam Faddis . . . describes the timidity of station chiefs terrified of getting blamed for mistakes, the obduracy of ambassadors who don’t want flaps, the ‘we’re all winners here’ training rules better suited for a kindergarten playground than intelligence work, the reluctance to hire and promote people who understand leadership. You read Beyond Repair and you realize: No wonder the CIA is screwed up! Faddis proposes a bold cure: Remake the CIA in the image of the World War II spy service, the OSS―smaller, flatter, tougher, smarter, meaner. If people would read this book and understand its message, it could save lives.”
―David Ignatius, Washington Post columnist and author of Body of Lies

“Drawing on his unique experience as a CIA operations officer, Charles Faddis makes a compelling case in Beyond Repair that the CIA must return to its Office of Strategic Services (OSS) roots to provide the United States with the intelligence it needs. Faddis has a deep appreciation for the OSS and great admiration for its legendary leader, General William J. Donovan, who frequently told OSS personnel that they could not succeed without taking chances. Faddis has taken such chances himself. General Donovan could have written this book. I know he would have read it and agreed wholeheartedly with its conclusion.”

Once upon a time, the CIA took the risks necessary to protect America. “If you fall,” went its mantra, “fall forward.” In Beyond Repair, one of the agency’s most respected former operatives mounts a scathing cri­tique of the preparedness of today’s CIA—and, spe­cifically, the Directorate of Operations at its core—to defend America against the dizzying dangers of the twenty-first century. In a compelling blend of analy­sis and fascinating true-life stories, Charles S. Faddis argues that the CIA has devolved into a low-risk or, often, no-risk bureaucracy of careerists whose mantra might be summed up thus: “Don’t fall.”

“Every senior officer I know in the CIA carries personal liability insurance,” writes Faddis, “because of the fear of being sued for actions taken in the line of duty.” And, he notes, no operatives who commanded CIA teams in Afghanistan have been promoted to key positions. Why? Because they operate within a system that is no longer built to encourage and reward the risk taking and creativity they excelled at.

Faddis discusses the birth of the CIA—then called the Office of Strategic Services—during World War II under “Wild Bill” Donovan, the twentieth-century American father of spy craft. Donovan’s daring would not get him far in today’s CIA, Faddis observes. Describing how the twenty-first-century CIA works from the inside out, he paints an unsettling picture of an agency that has truly gone awry—recalling, for example, his own experience in a Middle Eastern country as a chief of station without a qualified Arabic linguist on hand.

Faddis concludes by setting forth the main points of a plan for building a new entity. He proposes that this agency draw on the best qualities of the OSS (and readopt its name) while adapting to twenty-first-century needs, and that it be staffed by many of the CIA’s finest men and women. This new agency would maintain the midnight watch, so Americans can sleep well at night.

An insider’s account of why the CIA is ill-prepared to protect America, and why it must be replaced without delay “Faddis, a career CIA operations officer, pulls no punches in this provocative critique of the iconic and dysfunctional spy agency. . . . In a world where threats are multiplying and becoming more complex, [his] bleak assessment of the CIA should be required reading.”
—Publishers Weekly (starred review)
“Faddis describes the agency as rife with incompetence at every level.”
—New York Times

One of the Central Intelligence Agency’s most respected former operatives mounts a scathing cri­tique of the preparedness of today’s CIA to defend America in the twenty-first century. In a compelling blend of analy­sis and fascinating true-life stories, Charles S. Faddis discusses the birth of the CIA, how the agency works from the inside out, why things have gone awry—and how to build a new entity that will maintain the midnight watch so Americans can sleep well at night.