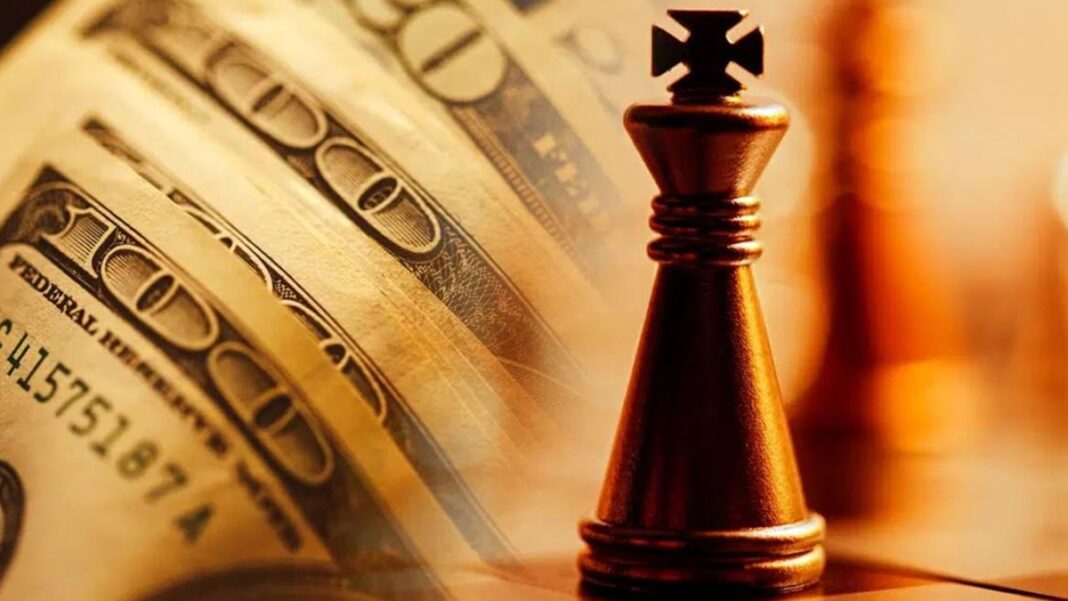 The Greenback teeters from the crushing calamities of Joe Biden. King Dollar is in danger, and it matters to your life.

Well, Bud is now owned by the Brazilians.

As for almighty Buck, our Greenback now teeters from the crushing calamities of Joe Biden. King Dollar is in danger, and it matters to your life.

Ever since the American “doughboys” turned the tide in WWI, the US claimed the world’s reserve currency, meaning it’s the global foreign exchange benchmark.

That century of dominance wanes now, crushed under the weight of stifling debt and the staggering policy failures of Joe Biden. In just 13 months in the Oval Office, Joe Biden already squanders an economic legacy built by generations through grit, smarts, and sacrifice.

Biden’s twin geopolitical failures overseas – the botched Afghanistan exit and this new weaponization of money over Ukraine – jeopardize the status of our currency and will soon bring much more untold pain to everyday American citizens, particularly those of modest means.

Americans understandably already feel that the Dollars in their accounts have been devalued. Right now, Real Wages descend in a tailspin in our land, as incomes cannot keep pace with soaring prices due to Biden.

Inflation, by all measures, already surges at a four decade record clip, from Apartment Rents to Gasoline. The hard-earned Dollars of working-class citizens simply buy less. A lot less. Soon, that loss of confidence in America’s Greenback will manifest itself relative to other countries, as well.

This administration’s abject failure in Afghanistan showcased for the world the debasement of American military power under Biden’s feckless stewardship. Rather than confront the existential threats that China presents to America, the military and intelligence complex of Washington instead focuses on woke ideological narratives and pursuing domestic political opponents within America.

Because of the dereliction of duty of Joe Biden and hapless hacks like General Mark “White Rage” Milley, America was run out of Afghanistan by medieval goat-herding terrorists with sidearms. As a consequence, 13 American heroes lost their lives in a disgraceful and ill-planned evacuation disaster.

The Kabul fiasco clearly convinced gangsters like Putin to doubt the efficacy and lethality of the Biden Pentagon. But in addition to this loss of military hegemony, Biden’s new adventure into weaponized finance also endangers our currency.

Right now, the West inflicts a totally unprecedented, concerted global attack on Russia’s currency by excluding Russia from international payment systems and making the Ruble nearly non-convertible. This unprecedented move against a major power represents an immediate assault upon the spending power of everyday Russians.

Notably, the capitals of the West conveniently carved out key exclusions. They still welcome massive flows of Russian Energy westward. Payments for these products, up to $1 Billion per day, flow via existing SWIFT systems – right into the accounts of Putin and the Oligarchs. So much for the “principles” of the Davos mavens who virtue signal with Ukraine lapel pins.

The Russian moguls can handle the Ruble volatility, at least in the near term, but regular Russian citizens must confront the very sudden reality that their purchasing power plummets. Due to a contrived monetary attack, regular Russians find themselves stuck with increasingly worthless meager savings. Their ability to buy goods plunges by the very hour as Biden and his pals in London and Brussels join a coordinated effort to ruin the Ruble, using financial levers that were not employed against even the evil Nazis during WWII.

Here is the latest update of the US Dollar and its historic ascent vs. the beleaguered Russian Ruble:

As I have warned repeatedly, we are playing with fire with such intense escalation, especially as a response to a regional battle where the United States finds no vital national interest.