Home Keep Up Biden Regime Biden Handing Over U.S. Sovereignty to WHO 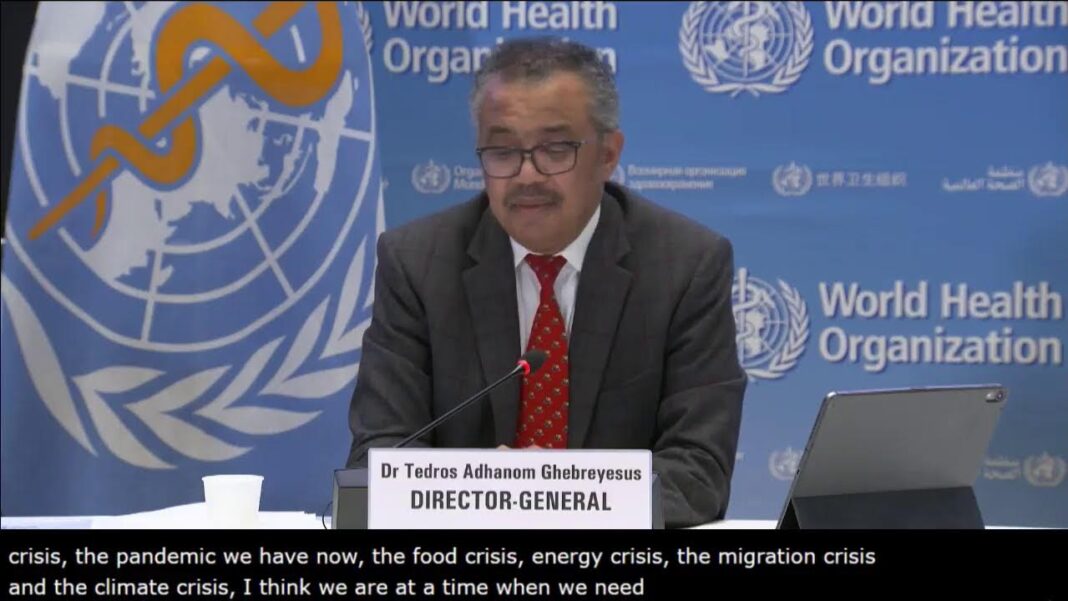 WHO Amendments Would Allow Massive Power Overreach if Passed

Please take seriously the severity of this existential threat to everything free people hold dear. Do everything in your power to pass this report on to others and to find ways to communicate with and to influence people to stop empowering WHO to take over our national sovereignty and freedom.

On May 22-28, 2022, ultimate control over America’s healthcare system, and hence its national sovereignty, will be delivered for a vote to the World Health Organization’s governing legislative body, the World Health Assembly (WHA).

This threat is contained in new amendments to WHO’s International Health Regulations, proposed by the Biden administration, that are scheduled as “Provisional agenda item 16.2” at the upcoming conference on May 22-28, 2022.1

These amendments will empower WHO’s Director-General to declare health emergencies or crises in any nation and to do so unilaterally and against the opposition of the target nation. The Director-General will be able to declare these health crises based merely on his personal opinion or consideration that there is a potential or possible threat to other nations.

If passed, the Biden Administration’s proposed amendments will, by their very existence and their intention, drastically compromise the independence and the sovereignty of the United States. The same threat looms over all the U.N.’s 193 member nations, all of whom belong to WHO and represent 99.44% of the world population.2

These regulations are a “binding instrument of international law entered into force on 15 June 2007.”3 U.N. members states can be required by law to obey or acquiesce to them.

How It Became Official

On January 18, 2022, with no public awareness, officials from the Biden Administration sent the World Health Organization these extensive amendments to strengthen WHO’s ability to unilaterally intervene into the affairs of nations merely suspected of having a “health emergency” of possible concern to other nations.4 The U.S. amendments cross out a critical existing restriction in the regulations: “WHO shall consult with and attempt to obtain verification from the State Party in whose territory the event is allegedly occurring…”5 By eliminating that, and other clauses (see below), all the shackles will be removed from the Director-General of WHO, enabling him to declare health emergencies at will.

The amendments would give WHO the right to take important steps to collaborate with other nations and other organizations worldwide to deal with any nation’s alleged health crisis, even against its stated wishes. The power to declare health emergencies is a potential tool to shame, intimidate, and dominate nations. It can be used to justify ostracism and economic or financial actions against the targeted nation by other nations aligned with WHO or who wish to harm and control the accused nation.

Although sponsored by an American administration, WHO’s most significant use of this arbitrary authority to declare national emergencies will be used against the United States if our government ever again dares to take anti-globalist stands as it did under the Trump administration.

How Much Time Do We Have to Stop the Amendments?

The contents of the proposed amendments were not made public until April 12, 2022,6 leaving little time to protest before the scheduled vote. As noted, the amendments are scheduled and almost certainly will be enacted May 22-28, 2022.
The existing WHO regulations then provide for an 18-month grace period during which a nation may withdraw its “yes” vote for amendments, but the current proposed amendments would reduce that opportunity to six months. If the U.S.-sponsored amendments are passed, a majority of the nations could, in the next six months, change their individual votes and reverse the approval. But this is a much more difficult proposition than stopping the whole process now.

We must act now to prevent the passage of the amendments, including putting sufficient pressure on the United States to withdraw them from consideration. If that fails, and the amendments are approved at the May meeting of the WHO governing body, we must then make the effort to influence a majority of the nations to change their votes to “no.”

Without Organized Resistance, the Amendments Will Definitely Pass

On January 26, 2022, the same U. S. Permanent Mission to the United Nations in Geneva sent a one-page memo to WHO confirming that the amendments had been sent. It also contained a brief report by the same Loyce Pace, Assistant Secretary for Global Affairs HHS.7 Most importantly, the memo listed all the nations backing the U.S. amendments. The size and power of the group guarantee that the amendments will be passed if unopposed by significant outside pressure.

Here are the 20 nations, plus the European Union, listed by the U.S. as supporting the amendments:

The European Union, a globalist organization, has been among the biggest backers of increasing WHO’s global power. The EU includes the following 27 Western nations:

Austria, Belgium, Bulgaria, Croatia, Republic of Cyprus, Czech Republic, Denmark, Estonia, Finland, France, Germany, Greece, Hungary, Ireland, Italy, Latvia, Lithuania, Luxembourg, Malta, Netherlands, Poland, Portugal, Romania, Slovakia, Slovenia, Spain, and Sweden.
That’s a total of 47 nations supporting the U.S.-authored amendments. All of them have endorsed empowering WHO to declare a possible or potential health emergency or crisis within any nation despite its objections and refusal to cooperate. To repeat, these amendments will pass unless American citizens, as well as citizens worldwide, mount a very strong opposition.