After facing a bevy of bipartisan criticism, President Joe Biden on Monday afternoon acknowledged that the collapse of Afghanistan happened more quickly than his administration had anticipated.

“This did unfold more quickly than we anticipated,” Biden said at the White House, blaming Afghanistan’s political and military leaders for giving up and fleeing the country.

The president also accused the Afghan government of stopping the United States from carrying out a mass evacuation plan ahead of the pullout, alleging it would create a “crisis of confidence.”

White House officials and U.S. intelligence officials are “closely monitoring the situation on the ground in Afghanistan,” the president also said, adding that he doesn’t regret withdrawing from the country.

The mission in Afghanistan, which spanned nearly 20 years, was designed to take out the al-Qaeda terrorist network that was blamed by intelligence officials for triggering the Sept. 11 terrorist attacks. The United States also killed terror leader Osama bin Laden “a decade ago,” Biden said.

Biden added that the invasion of Afghanistan was “never supposed to be nation-building” or “creating a centralized democracy.”

The president didn’t take any questions. The White House confirmed to reporters that he’s heading back to Camp David, where he’s spent the past several days on vacation.

In his speech, Biden appeared to touch on the chaos that is currently unfolding at the Kabul airport, where numerous Americans and foreign citizens remain. U.S. troops were fired on by armed assailants, forcing the soldiers to return fire, said Pentagon spokesman John Kirby earlier in the day.

“Our diplomatic presence has been consolidated at the airport as well,” said Biden, adding that evacuation flights will be held over the coming days.

The president, meanwhile, suggested that the Afghanistan collapse was the responsibility of former President Donald Trump for negotiating a deal with the Taliban to start the pullout on May 1, 2021, adding that his administration was forced to abide by the contours of a deal that Trump had brokered.

But in a number of statements over the past week, Trump criticized Biden’s pullout strategy, asking: “Can anyone even imagine taking out our Military before evacuating civilians and others who have been good to our Country and who should be allowed to seek refuge?”

“These [military] people left topflight and highly sophisticated equipment. Who can believe such incompetence? Under my Administration, all civilians and equipment would have been removed,” Trump also said, referring to American weapons and military vehicles being captured by Taliban forces in recent days.

Over the weekend, Biden, who was on vacation at Camp David, faced significant bipartisan criticism for not addressing the Taliban takeover and questioning U.S. military intelligence over the pullout. Even several former Defense Department officials and generals chimed in, comparing the Afghan government collapse and U.S. Embassy evacuation to the 1975 fall of Saigon, the 1979 Iranian hostage situation, or the 1961 Bay of Pigs incident. 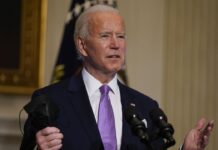 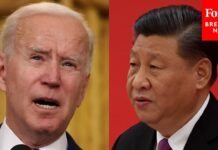