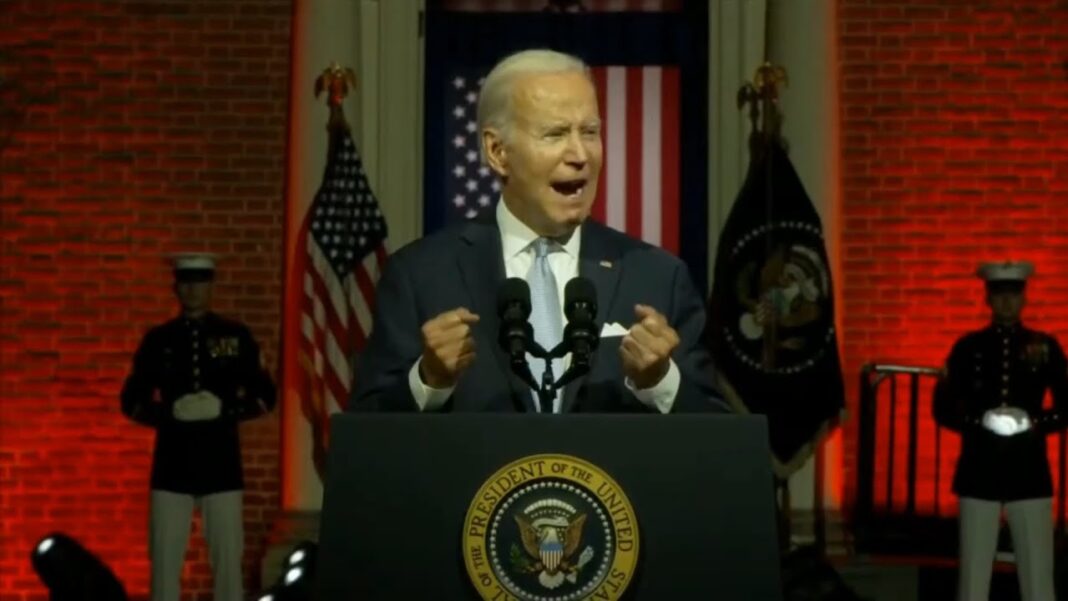 For starters, we need to always remind ourselves that while Joe Biden was once again put forth as the sock puppet of the current presidential charade, he is not personally responsible for a single stance or policy being inflicted on America by the Cabal in the White House. It is beyond reason to play along with the pretense that he had any other genuine input into the vile message he delivered on September 1. Nobody with even a modicum of sense believes he determined a particular course of action, or oversaw a single syllable of how his address was crafted.

It does no good to direct our outrage at Ol’ Joe for the obscenity we witnessed, while the noxious players who put forth the entire event remain in obscurity and thus avoid culpability. Real America was subjected to a venomous attack that was intended to stoke anger against it and marginalize those who reject both the sham “election” that put this Cabal into power, and the legitimacy of their consistently disastrous policies that have ensued ever since. And from the raging inflation, to the shortages of basic commodities, to the needless death and suffering from the lockdown lunacy, to the treasonous betrayal of Americans in the Afghanistan debacle, if the perpetrators are ever to be held to account, the spotlight of guilt will have to reach far beyond Biden.

The same goes for the abhorrent effort to instigate a war of suppression against Middle America last Thursday. It did not come from that mindless pallid specter at the podium but from those who manipulate him to their own personal ends. The scripted ranting and raging was all their doing. The words of attack and divisiveness are their standard operating procedure, and the means by which they have amassed power among the lowest, most gullible, and most pernicious members of society. It’s who leftists are, and how they operate.

Of course all of this was predictably couched in the unfettered arrogance and presumptions of inherent superiority that completely define them. While hurling alarmist accusations at people who honorably go to work, plant the crops, raise their children, and mine the resources to keep the Nation thriving, the Biden speech asserted that it is the American left who uphold the Constitution, the rule of law, and the “will of the people.”

Throughout the seething tirade, the consistent underlying message sought to establish official condemnation of those who reject the “legitimacy” of the stolen 2020 presidential election. Americans who refuse to ignore the flagrant vote manipulation and cheating that was plainly evident on election night, and has only been further bolstered by amassed evidence ever since, are now deemed to be working to “undermine democracy itself.” Translation: Those who believe their own eyes over and above the leftist narrative are enemies of the state. This is not a script from some cheap dystopian movie thriller. It is right out of the playbook of tinhorn despots.

Despite the efforts of the leftist Democrat/Fake News media axis to portray the event as the work of an impassioned and principled national leader, valiantly fighting for his country to rally and unify it around a worthy cause, the episode has proven to be a total fiasco, in every respect, for those who concocted it. From the intensity of the screed being spewed by Biden, to his pathetic, rehearsed gesticulation, to the attempt at creating a mood of fierce national purpose and resolve with the bizarre lighting and Marines (who undoubtedly were acting under orders) immovably standing guard behind “Herr Leader,” the real effect was one of a poorly contrived parody, were its implications not so grave for the Country.

Public reaction was anything but that desired by those who perpetrated the affair. Expectations by the left that those who were attacked in the speech would be humiliated and intimidated into silence were naively short sighted. Rather than shaming or scaring Americans into acquiescence to the “New Order,” it has steeled the resolve of Patriots across the land in a manner that has rarely been seen outside of foreign surprise attacks, such as Pearl Harbor and 9-11. Americans are making their voices unmistakably heard, loudly condemning it as further proof of just how unhinged and dangerous leftist Democrats have become.

The Biden Cabal, much to their dismay, immediately found themselves in “damage control” mode, hardly carrying their expected momentum forward to crush the MAGA movement as they had planned to do, in the wake of the speech. Rather, in the face of enormous backlash from “We the People,” they are frantically trying to defend themselves from righteous denunciations by decent Americans, for their insidious attempts to establish themselves as dominant beyond accountability. They even put forth Ol’ Joe himself, early the next day, to essentially recant and deny what he had spoken so plainly only a few hours earlier. And the backtracking has not ceased ever since.

The most profound aspect of this abominable spectacle has yet to receive the coverage that it deserves. While the intent of the Cabal was clearly to portray its impregnable strength and dictatorial power over the Nation, it actually revealed the exact opposite. This was not the behavior of a leadership that believed itself to be spearheading a grand movement for America. This was not the behavior of a government that is confident in deriving its authority by “the consent of the governed.”

Rather, its behavior embodies the total desperation and paranoia of a failed regime. Having not been genuinely brought to power, and proving from day one to be miserably inept in all of its policies, both foreign and domestic, the Biden Cabal faces the serious prospect of an electoral drubbing this November, barring even more massive cheating than was perpetrated to steal the White House in 2020. And people are watching much more closely this time.

So while the Nation is right to be outraged and affronted by the disgusting pretense of power last week, the real message that needs to be gleaned is that the American people are not yet subjugated to this evil onslaught. We still have a voice, and the vicious but flailing efforts of leftist Democrats to snuff out the lamp of liberty are not yet fulfilled. Now is the time to speak truth to the leftist enemy, more loudly than ever.