The Biden administration’s move to sell nearly 1 million barrels of oil reserves to China “defies all common sense” and is benefiting U.S. adversaries at the cost of national interests, said Republican lawmakers, with some calling the action “impeachable.”

The Department of Energy in April sold 950,000 barrels of Strategic Petroleum Reserve to Unipec America, the U.S. arm of China’s largest trading company Unipec, which is wholly owned by China Petrochemical Corporation, also known as Sinopec.

Sinopec is a state-run Chinese oil and gas enterprise based in Beijing that has been tied to President Joe Biden’s second son, Hunter Biden, whose foreign business transactions have fueled growing scrutiny.

The sale, though little noticed at the time, is drawing heavy backlash from Republican lawmakers. As the U.S. Strategic Petroleum Reserve (SPR), the world’s largest emergency supply of crude oil, tank to a historic low while Americans nationwide feel the pinch of soaring gas and diesel prices, such a move runs counter to American interests and is putting national security at risk, the officials said.

“The Biden Administration should not be sending our reserves, which we need for our country, to China. It is foolish and defies all common sense,” Sen. Marco Rubio (R-Fla.), who in June introduced a bill to ban oil export to China, told The Epoch Times.

“While you are paying FIVE DOLLARS a gallon at the pump and struggling to pay your electricity bill, Biden just sold one million barrels of our reserved oil to China so his family can make a buck. This is impeachable,” Nehls said on Twitter. 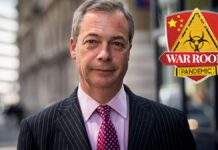 Nigel Farage: The World Is ‘Bewildered’ By The ‘Politicization Of America’s Justice System’