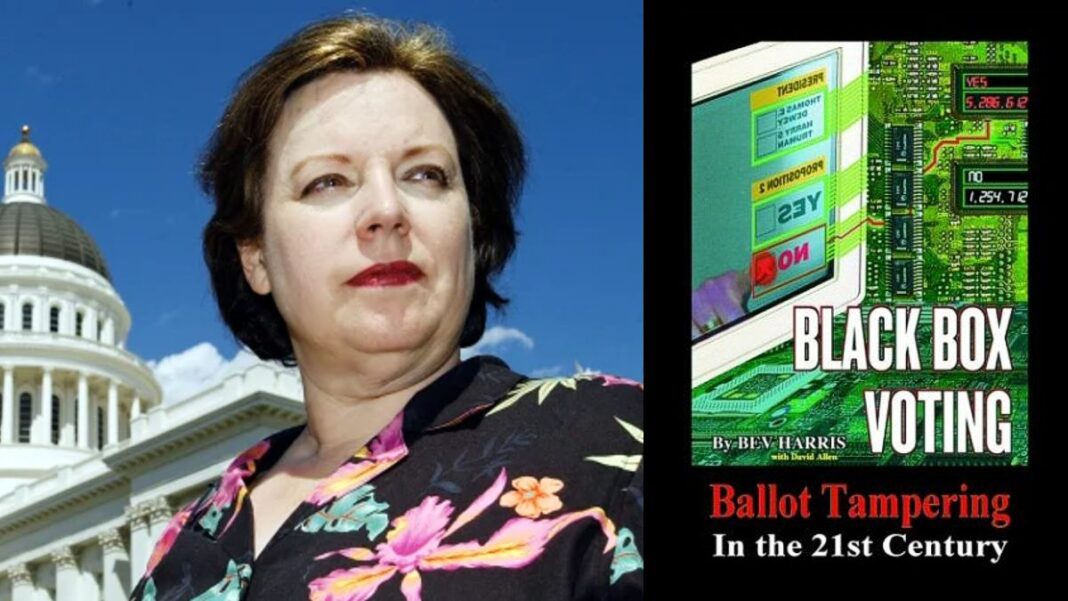 Author Bev Harris was then a 52-year old grandma who found 40,000 secret voting machine files on the web, which have now been studied by computer scientists all over the world. Black Box Voting is the book she published on July 1, 2003 which held the results of her investigations into the voting industry.

What she learned was that modern-day voting systems are run by private for-profit corporations, rely on a few cronies for oversight, using a certification system so fundamentally flawed that it allows machines to miscount and lose votes, with hidden back doors that enable “end runs” around the voting system. Find out why your vote might not count — and what to do about it!

Black Box Voting Book is a meticulously researched investigation into the cryptic voting machine industry. The people who make the machines which count our votes are answerable to virtually no one. Some of these machines, which are literally trusted with our democracy, are the products of convicted felons working in almost complete secrecy for corporations with openly stated political agendas. From Diebold’s CEO Wally O’Dell openly promising to “deliver” Ohio to George W. Bush, to Election.com’s ownership by a private Saudi corporation, to ES&S counting the votes of a U.S. senator who owns stock in the company, these companies have an arrogant disregard for conflict of interest.

If we cannot trust out votes to be counted accurately, then our democracy is null and void.

“Riveting. Bev Harris stumbled onto a national story ignored by every big-city newspaper in the land, and worked it deeper and deeper with scoops that would have made her career at the New York Times or Washington Post.”
— Michael Shnayerson, Vanity Fair Magazine

“Harris is a writer whose investigations into the secret world of voting equipment firms have led some to call her ‘the Erin Brockovich of elections.’ Her facts check out. Her stories on voting machines are based not on her politics but on serious, in-depth investigative reporting.” — Salon.com, Feb. 2003

Bev Harris is a writer and literary publicist who became curious about electronic voting in October 2002. She spent over 2000 hours investigating the voting industry, interviewing county election officials, voting industry executives, and even the programmers who write the secret code that controls the systems. Her work has now been covered on ABC, CNN, CNBC, FOX, CBS, and the New York Times, and was the feature article for the April 2004 issue of Vanity Fair magazine.