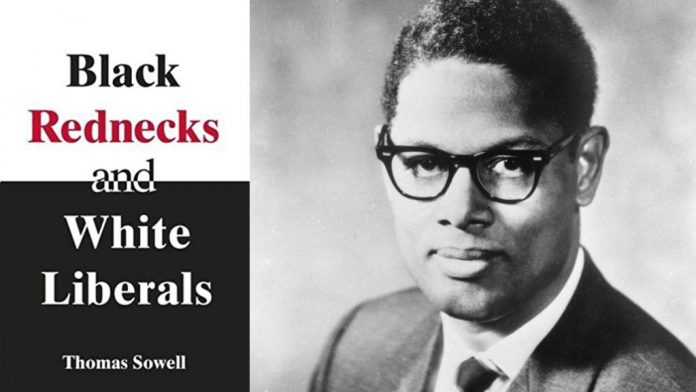 Black Rednecks & White Liberals is an explosive book that challenges many of the long-prevailing assumptions about blacks, about Jews, about Germans, about slavery, and about education. Plainly written, powerfully reasoned, and backed with a startling array of documented facts, Black Rednecks and White Liberals takes on not only the trendy intellectuals of our times but also such historic interpreters of American life as Alexis de Tocqueville and Frederick Law Olmsted. In a series of long essays, this book presents an in-depth look at key beliefs behind many mistaken and dangerous actions, policies, and trends. It presents eye-opening insights into the historical development of the ghetto culture that is today wrongly seen as a unique black identity–a culture cheered on toward self-destruction by white liberals who consider themselves “friends” of blacks. An essay titled “The Real History of Slavery” presents a jolting re-examination of that tragic institution and the narrow and distorted way it is too often seen today. The reasons for the venomous hatred of Jews, and of other groups like them in countries around the world, are explored in an essay that asks, “Are Jews Generic?” Misconceptions of German history in general, and of the Nazi era in particular, are also re-examined. So too are the inspiring achievements and painful tragedies of black education in the United States. “Black Rednecks and White Liberals” is the capstone of decades of outstanding research and writing on racial and cultural issues by Thomas Sowell.

One of America’s foremost black conservative intellectuals returns with this provocative collection of contrarian essays. Hoover Institution Fellow Sowell, author of Ethnic America, argues that “internal” cultural habits of industriousness, thriftiness, family solidarity and reverence for education often play a greater role in the success of ethnic minorities than do civil-rights laws or majority prejudices. The title essay posits a “black redneck” culture inherited from the white redneck culture of the South and characterized by violent machismo, shiftlessness and disdain for schooling. White liberals, gangsta-rap aficionados and others who lionize its ghetto remnants as an authentic black identity, Sowell contends, have their history wrong and help perpetuate cultural pathologies that hold blacks back. Sowell also examines the cultural achievements of such “middleman minorities” as Jews and expatriate Chinese whose frequent persecution, he feels, represents an animus against capitalism. And he defends Western culture itself against charges that it was uniquely culpable for slavery; in fact, he contends, it was uniquely responsible for eradicating slavery. Many of Sowell’s arguments-that the 20th-century resegregation of Northern cities was a response to the uncouthness of black rednecks migrating from the South, or that segregated black schools often succeeded by suppressing redneckism with civilized New England puritanism-will arouse controversy, but these vigorously argued essays present a stimulating challenge to the conventional wisdom.

Thomas Sowell is persuasive and provocative and always scintillating. I’ve read all his books and never been even faintly disappointed. — Fred Barnes, executive editor, The Weekly Standard, and Fox News commentator

Tom Sowell is a national treasure, America’s most perceptive, productive, and thoughtful commentator on racial and ethnic issues. — Stephan Thernstrom and Abigail Thernstrom, authors of America in Black and White

Thomas Sowell has taught economics at Cornell, UCLA, Amherst, and other academic institutions, and his Basic Economics has been translated into six languages. He is currently a scholar-in-residence at the Hoover Institution, Stanford University. He has been published in both academic journals and such popular media as the Wall Street Journal, Forbes, and Fortune and writes a syndicated column that appears in newspapers across the country.