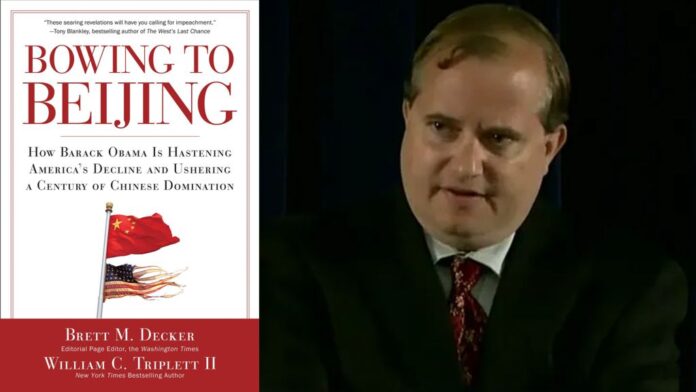 While the Obama administration is mired in big-government “solutions” to “threats” such as global warming, unregulated businesses, and free-market healthcare, Obama officials have ignored and compounded the single biggest danger facing the United States: the rising power of communist China. In Bowing to Beijing, Brett M. Decker and Bill Triplett cut through the fog of soothing, pro-China propaganda to reveal the disturbing truth: far from the gradually reforming “partner” portrayed by its many American apologists, China is an aggressive and rapidly militarizing criminal state feverishly striving to displace America as the world’s preeminent power. Shockingly, despite Chinese leaders showing their hostile intentions in every realm, the Obama administration refuses to take action or even acknowledge the threat—and as new evidence indicates, has gone so far as to actively cover up China’s misdeeds.

”China’s military buildup is a reality the United States must deal with and not just today, but well into the future. Conventional weapons systems, cruise and ballistic missiles, blue-water naval forces, and nuclear weapons are all part of Beijing’s aggressive plan. Brett M. Decker and Bill Triplett have written a compelling analysis of China’s plans and programs, and lay out a comprehensive and persuasive proposal for America’s response. Policy-makers must read this book.” –John R. Bolton, former US ambassador to the United Nations

”To understand what China’s unprecedented rapid modernization and expansion of its military forces mean in terms of its clear objective to achieve regional supremacy in the western Pacific and beyond, Bowing to Beijing is an absolute must-read. Brett M. Decker and Bill Triplett make clear that regardless of the vast economic relations between China and the US, unless we maintain our military deterrence capability, a serious confrontation looms just over the horizon.” –Admiral James A. Lyons, Jr., former commander in chief of the US Pacific Fleet –This text refers to an out of print or unavailable edition of this title.

BRETT M. DECKER was previously stationed in Hong Kong as an editor and editorial page writer for the Wall Street Journal. He is now the editorial page editor at the Washington Times and author of Global Filipino. He has also served as senior vice president of the Export-Import Bank and the Pentagon Federal Credit Union. He holds a master’s degree in government from Johns Hopkins University and in national security and strategic studies from the US Naval War College. He lives in Washington, DC.

WILLIAM C. TRIPLETT II is the coauthor of the bestselling Year of the Rat, Red Dragon Rising, and Rogue State. He is the former chief Republican counsel to the Senate Foreign Relations Committee and his articles on China have appeared in the New York Times, Washington Post, and Washington Times. He resides near Annapolis, Maryland. –This text refers to an out of print or unavailable edition of this title.