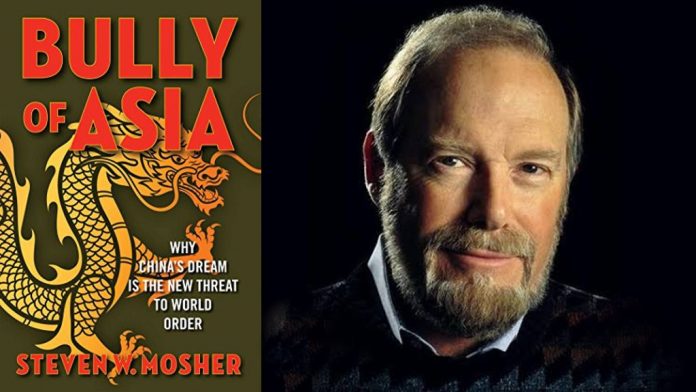 In a world bristling with dangers, only one enemy poses a truly mortal challenge to the United States and the peaceful and prosperous world that America guarantees. That enemy is China, a country

Steven Mosher exposes the resurgent aspirations of the would-be hegemon–and the roots of China’s will to domination in its five-thousand-year history of ruthless conquest and assimilation of other nations, brutal repression of its own people, and belligerence toward any civilization that challenges its claim to superiority.

The naïve idealism of our “China hands” has lulled America into a fool’s dream of “engagement” with the People’s Republic of China and its “peaceful evolution” toward democracy and freedom. Wishful thinking, says Mosher, has blinded us to the danger we face and left the owlrd vulnerable to China’s overweening ambitions.

Mosher knows China as few Westerners do. Having exposed as a visiting graduate student the monstrous practice of forced abortions, he became the target of the regime’s crushing retaliation. His encyclopedic grasp of China’s history and its present-day politics, his astute insights, and his bracing realism are the perfect antidote for our dangerous confusion about the Bully of Asia.

With mounting admiration I have read Bully of Asia. Mosher’s new book is the most sophisticated, up to date, richly-based argument in existence for dangers in the Rise of China – dangers to the giant’s neighbors and to America. The author has long experience of China, writes beautifully, knows ancient history, and cares about the values of the democratic West and its friends. Bully of Asia burst’s the bubble of Beltway liberals’ trembling over risks in “upsetting China.” Beijing is realistic; Mosher, digging beneath the surface of current issues, urges the US to be realistic too. ~ Dr. Ross Terrill, Fairbank Center, Harvard University

Steven W. Mosher, president of Population Research Institute, is a leading authority on China. He is the author of numerous books including Journey to the Forbidden China; A Mother’s Ordeal: One Woman’s Fight against China’s One-Child Policy; Population Control: Real Costs, Illusory Benefits; and Broken Earth: The Rural Chinese. He frequently appears on Good Morning America, 60 Minutes, and CNN News, and publishes in the New Republic, National Review, and the Wall Street Journal.