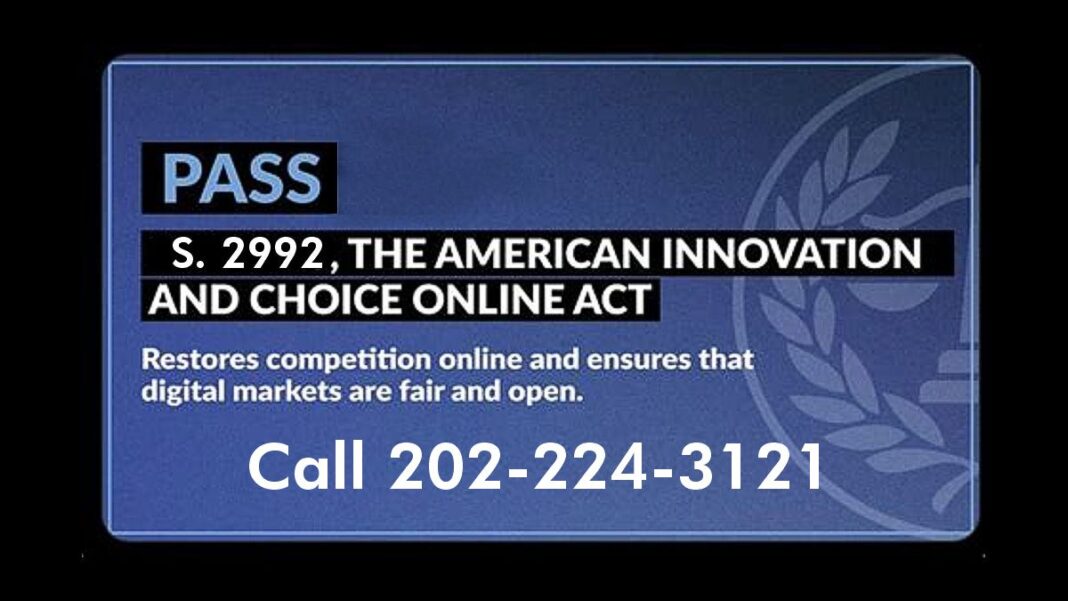 Call Your legislators at 202-224-3121 today and ask them to SUPPORT the bipartisan bill S. 2992, the American Innovation and Choice Online Act. This is the BIG TECH non-discrimination bill that breaks up the gatekeeping power of Google, Amazon, Facebook and Apple. These trillion dollar big tech monopolist control information and commerce, as well as interfere in elections using that control.

S. 2992, the American Innovation and Choice Online Act, was held over last week and is now ripe for committee consideration. Senator Klobuchar and I, along with 10 of our Senate colleagues from both sides of the aisle, introduced this bill to address growing concerns with competition on Big Tech platforms.

I want to stress that this bill is not meant to break up Big Tech or destroy the products and services they offer that many of us, including myself, enjoy and use. Rather, the goal of this bill is to prevent conduct that stifles competition while ensuring that pro-consumer innovations and offerings are still available.

The Antitrust Subcommittee held four hearings over the past year that directly explored all of these issues, including a recent hearing in December that focused on the non-discrimination competition issues that this bill addresses.

The manager’s amendment incorporates a lot of feedback we’ve received from both senators and stakeholders. Among other things, the manager’s amendment addresses national security concerns by clarifying that the legislation doesn’t require data to be shared with bad actors. It clarifies that a business can require user consent before sharing data with a third party company.

It ensures that foreign companies, including Chinese Big Tech companies such as TikTok, are subject to the same rules of the road. It provides that enforcement action can only be brought in Federal District Court. These are just a few of the improvements that the manager’s amendment makes to the bill, so I hope everyone can support these changes.

Again, I thank you Mr. Chairman for putting the bill on the agenda. I look forward to voting favorably on this legislation and urge all of my colleagues to do the same.

I’d also like to return to our discussion at last week’s executive meeting about this committee’s oversight activities.

The chairman stated last week, “We’ve had an oversight hearing and will have more, with Merrick Garland. For the last four years, unfortunately, in the previous administration, we didn’t. But I think we’re trying to resume our position as the oversight committee, active oversight committee, for the judiciary and the Department of Justice.”

And the list would be much longer if I included oversight hearings relating to Executive Branch departments and agencies beyond the Justice Department. Clearly, when I was chairman, this committee engaged in robust oversight of the Trump administration.

I strongly encourage this committee to quickly assert its oversight equities on the Justice Department. As it currently stands, by any metric, Attorney General Garland has failed to meet the responsiveness standard required of this committee.

We also have a number of judicial nominees up today. I’ll be supporting Judge Montenegro. I also wanted to explain my vote against the nomination of Dale Ho.

Mr. Ho has extremely controversial legal views. They include supporting interpreting the law based on personal “lived experience” and applying the Bill of Rights differently based on what community a person is in. These views are far outside the mainstream. Mr. Ho has repeatedly shown that he’s a partisan activist who lacks the judicial temperament to serve as a federal judge. He has spent much of his professional life on Twitter and on cable TV attacking conservatives and the states, courts, and people with whom he disagrees.

So I’ll vote against him.