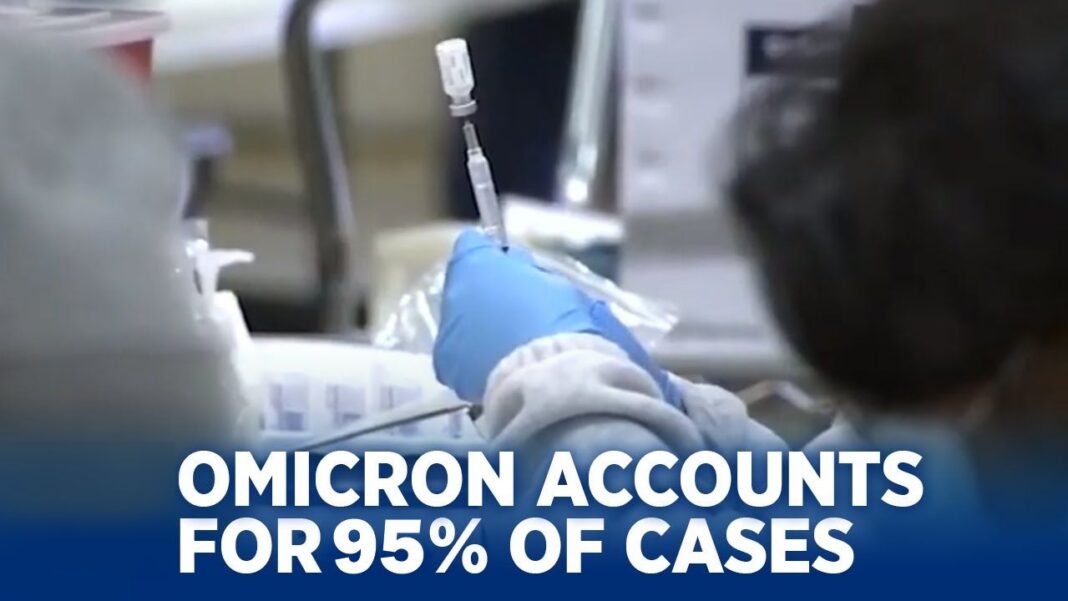 The COVID-19 Omicron variant accounted for approximately 95.4 percent of U.S. COVID-19 cases diagnosed in the week ended Jan. 1, said the Centers for Disease Control and Prevention (CDC) in an update published Tuesday.

With the CDC’s finding, it suggests Omicron is highly contagious, as it was able to displace the previously dominant Delta strain in only a few weeks. The Delta variant now accounts for about 4.6 percent of all cases, the CDC figures show.

The United States, meanwhile, set a global record of almost 1 million new coronavirus infections reported on Monday, according to a tally, nearly double the country’s peak of 505,109 hit just a week ago.

About 978,856 new infections that were reported Monday include some cases from Saturday and Sunday, when many states do not report. The average number of U.S. deaths per day has remained fairly steady throughout December and into early January at about 1,300, according to a Reuters tally.

“We are seeing more and more studies pointing out that Omicron is infecting the upper part of the body. Unlike other ones, the lungs who would be causing severe pneumonia,” World Health Organization (WHO) Incident Manager Abdi Mahamud told Swiss-based journalists on Tuesday.

He said it is good news, “but we really require more studies to prove that.”

Since the heavily mutated variant was first detected in November, WHO data show it has spread quickly and emerged in at least 128 countries. However, while case numbers have surged to all-time records around the world, the hospitalization and death rates are often lower than at other phases in the pandemic.

“What we are seeing now is … the decoupling between the cases and the deaths,” Mahamud said.

The Omicron variant was first detected by doctors in South Africa in late November before the World Health Organization designated it as one “of concern.”

Policymakers in the United States should be “shifting our focus, especially in an era of vaccination, to really focus on preventing illness, disability, and death, and therefore counting those,” she told AP.