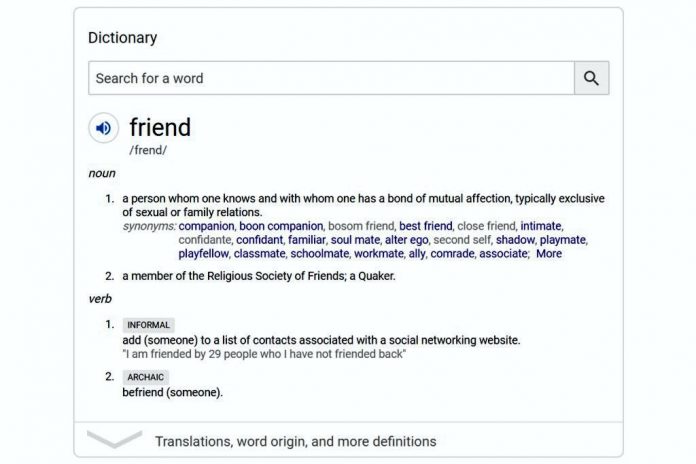 As a youth I had a friend that was bullied constantly by a neighbor. Among numerous other things, the bully would catch him by the hair and push him around, take his bike and ride away with it. He would later leave the bike in my friends front yard, knowingly getting my friend in trouble for leaving his bike out. My friend’s grandmother was friends with the bully’s family and she had no idea how difficult the bully made life for my friend, who took seriously the bully’s threats if he told. The bully would complain to his parents that my friend didn’t like him. One day, my friend’s grandmother got the two boys together and told my friend that he had to be “friends” with the bully. My friend was very upset and confused and asked how he could be “friends” with someone who treated him so awfully and who he feared so much. We looked up the word “friend” in the dictionary and it said something like “a person attached to another by feelings of affection or personal regard.” My friend would have to change the definition of the word “friend” to be able to be “friends” with the bully.

I think that the situation with my friend can be applied when it comes to the issue of changing the meaning of the word “marriage”.

For thousands of years, “marriage” has been defined as something like “the social institution under which a man and woman establish their decision to live as husband and wife by legal commitments, religious ceremonies, etc.” This is the reality surrounding the definition of “marriage”. Just because my friends grandmother wanted the boys to be “friends”, in reality the term did not apply, “friends” did not fit the type of relationship the boys had. The same reasoning can be applied to “marriage”. Just because we want to apply the definition of “marriage” to same sex relationships does not mean that the the definition applies.