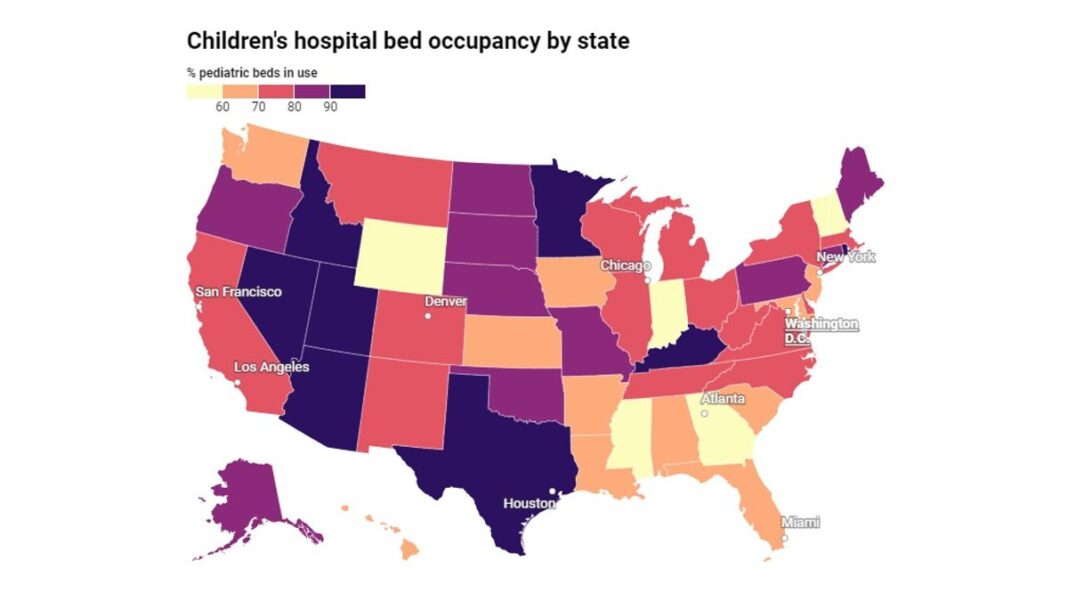 Covid and flu hospitalizations are increasing, while respiratory syncytial virus appears to be retreating in some states, the CDC recently reported.

Hospitals this winter are facing the simultaneous threat of Covid, flu, and RSV (a “tripledemic”) for the first time. But as most people return to normal life, traveling and gathering largely unmasked, all three viruses are circulating widely. Public health officials have said many people are probably more vulnerable to flu and RSV this year because they weren’t infected in the past two years, which means their immunity is lower.

Three-quarters of children’s hospital beds are already full nationwide heading into winter, as youngsters are hit by a “tripledemic” of viruses blamed on lockdown curbs. See an NBC report below.

Phase Three Of The U.S. Tripledemic

The interactive map below (learn more here) shows eight states had more than 90 percent of their pediatric beds occupied on December 3, the latest date available, with wards in one state completely overwhelmed by admissions. Across the country, 75.3 percent of children’s beds were filled with sick patients.

There are also growing concerns about a wave of Strep A infections striking the US after 15 children in the UK died from the normally benign bacterial bug – which is more common after viral infections such as RSV and flu. Idaho, Arizona, and Rhode Island are the worst-hit states in America. Meanwhile, some are already telling people to mask up again – and not for Covid.

New York City officials are once again advising residents to mask up – this time to curb the spread of flu and respiratory syncytial virus (RSV) as well as Covid. Dr. Ashwin Vasan, the commissioner of NYC Health, issued an advisory today urging the use of face coverings in indoor public places.

Where are children’s ICUs busiest?

Where are children’s hospitals busiest?

More than 25,000 people were admitted to hospitals with the flu during the week ending December 3, an increase of 32% compared with the week prior, according to a report published by the CDC on Friday. The hospitalization rate for the flu remains at the highest level for this time of year in a decade, according to the CDC.

So here we go again – a “tripledemic?”

Is this “tripledemic” the start of something? Or, as implied in the above report, people have had their immune systems damaged by the Covid “pandemic,” and this will be a merely elevated Flu season. In any case, do what you need to maintain good health, consult your doctor as needed and stay safe.