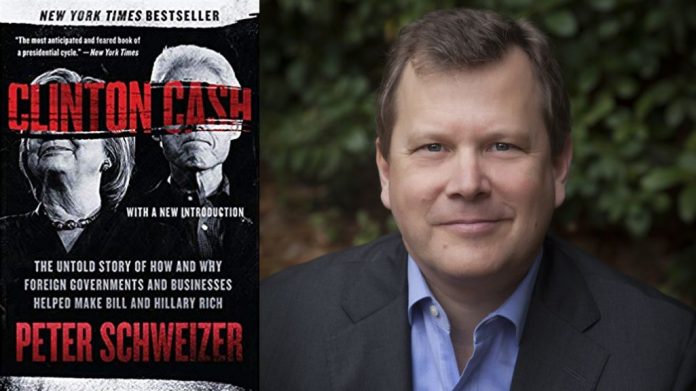 The definitive takedown by the #1 New York Times bestselling author of Secret Empires.

In 2000, Bill and Hillary Clinton owed millions of dollars in legal debt. Since then, they’ve earned over $130 million. Where did the money come from? Most people assume that the Clintons amassed their wealth through lucrative book deals and high-six figure fees for speaking gigs. Now, Peter Schweizer shows who is really behind those enormous payments.

In his New York Times bestselling books Extortion and Throw Them All Out, Schweizer detailed patterns of official corruption in Washington that led to congressional resignations and new ethics laws. In Clinton Cash, he follows the Clinton money trail, revealing the connection between their personal fortune, their “close personal friends,” the Clinton Foundation, foreign nations, and some of the highest ranks of government.

Schweizer reveals the Clinton’s troubling dealings in Kazakhstan, Colombia, Haiti, and other places at the “wild west” fringe of the global economy. In this blockbuster exposé, Schweizer merely presents the troubling facts he’s uncovered. Meticulously researched and scrupulously sourced, filled with headline-making revelations, Clinton Cash raises serious questions of judgment, of possible indebtedness to an array of foreign interests, and ultimately, of fitness for high public office.

“They made speeches for a lot of money and then things happened, I mean, if you read that book, that book is amazing. ” (Donald Trump, quoted in Breitbart News)

“Schweizer lays out compelling patterns in which the timing of policy decisions or international deals relative to donations, transcends coincidence – or at least, merits closer inspection. He narrates with crisp prose and illuminating detail.” (Forbes)

“Thank goodness, then, for Peter Schweizer and his blockbuster expose “Clinton Cash” (The New York Post)

“On any fair reading, the pattern of behavior that Schweizer has charged is corruption.” (Lawrence Lessig, Harvard Law School Professor)

“Schweizer reports on the Clintons’ enormous graft and corruption…There never has been a family like this in American history, not the Longs of Louisiana, not the scamps at Tammany Hall. The Clintons are a first, and with the help of journalists and then investigators they could be the last.” (American Spectator)

Most people assume that the Clintons amassed their considerable wealth through lucrative book deals and speaking gigs that sometimes paid as much as $750,000. But who paid these fees, and why?

As Peter Schweizer reveals, the Clintons typically blur the lines between politics, philanthropy, and business. Consider the following: Bill flies into a third world country where he spends time in the company of a businessman. A deal is struck. Soon after, enormous contributions are made to the Clinton Foundation, while Bill is commissioned to deliver a series of highly paid speeches. Some of these deals require approval or review by the US government and fall within the purview of a powerful senator and secretary of state. Often the people involved are characters of a kind that an American ex-president (or the spouse of a sitting senator, secretary of state, or presidential candidate) should have nothing to do with.

This blockbuster exposé reveals the mysterious multimillion-dollar Foundation gift from an obscure Indian politician that coincided with Senator Clinton’s reversal on the nuclear nonproliferation treaty; how Secretary of State Clinton was involved in allowing the transfer of what was projected to be 50 percent of US domestic uranium output to the Russian government; how multimillion-dollar contracts for Haiti disaster relief were awarded to donors and friends of Hillary and Bill . . . and more.Clinton Cash raises serious and alarming questions of judgment, of possible indebtedness to an array of foreign interests, and, ultimately, of fitness for high public office.