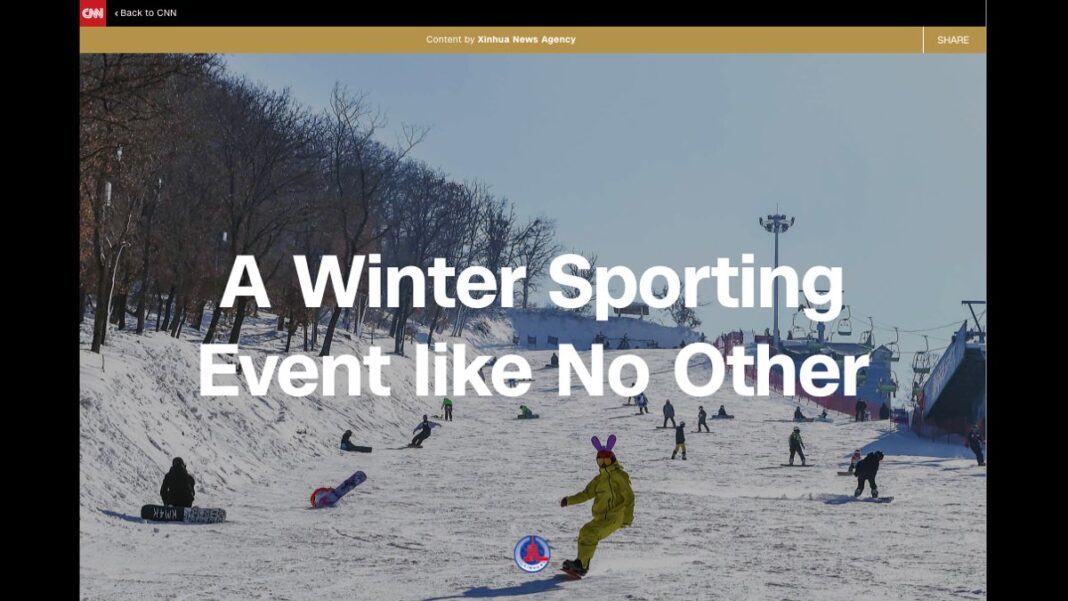 The Beijing Winter Olympics has been overshadowed from the start by complaints over China’s human rights record, harsh COVID-19 rules, and disputes over referees’ decisions. However, that wouldn’t be so apparent if one were to stumble upon a recent ad on CNN’s website.

“A Winter Sporting Event Like No Other” reads the headline of the article, which begins with a glowing account of the Chinese Communist Party’s (CCP) efforts to make the occasion more environmentally friendly than ever.

The “most anticipated winter sports event” has “become even greener,” the article claims before giving a glowing account of virtually every aspect of the Beijing Olympics, from its harsh pandemic protocols to technologies it said would make the Games a carbon-neutral event.

It cites a Wuhan Ice and Snow Sports Association official who voiced confidence that “the winter games will leave a legacy of talent, infrastructure, and technology, as the 2008 summer games in Beijing did.”

“The games is no passing fad,” Wang Jun, vice president of the state-run association, was cited as saying.

A click on either the top or bottom of the page directs readers to Xinhua’s “special coverage” of the Beijing Games with buoyant slogan-like headlines such as “President Xi steers China to unprecedented Olympic achievement” and “Beijing 2022 to usher in new era for winter sports globally.”

Absent from both pages are the controversies surrounding the Beijing Olympics that have dominated headlines in the lead-up to and during the Games.

Outcry over the regime’s genocidal campaign against Uyghur Muslims in Xinjiang, as well its rights abuses elsewhere, has led the United States and several other countries to stage a diplomatic boycott.