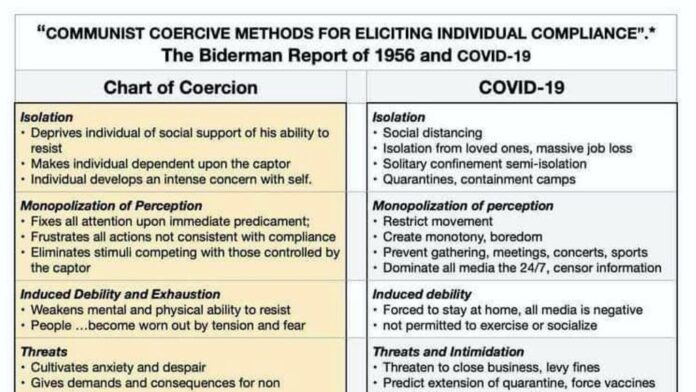 Biderman Report created by Dr. Alfred D. Biderman M.A., or to give it the full citation: Communist Coercive Methods For Eliciting Individual Compliance. Presented at a combined meeting of the Section on Neurology and Psychiatry with the New York Neurology Society at The New York Academy of Medicine, November 13, 1956 as part of a Panel Discussion on Communist Methods of Interrogation and Indoctrination. This report is based on work done under ARDC Project No. 7733, Task 77314, in support of the research and development program of the Air Force Personnel and Training Research Center, Lackland Air Force Base, Texas.

This is the primary report on communist brainwashing techniques used by the Chinese and North Koreans on captured American pilots and other military members to get false confessions and propaganda statements supporting the communists and against the UN Forces fighting them. It was, and to some extent still is, the core source for capture resistance training for the US Air Force and to some extent for the other services and has been since the late 1950’s. The techniques used in Korea worked to varying extents.

This is a Journeyman level tool for most purposes. An understanding of other tools, especially Operant Conditioning, should be attained before working with this tool at more than the basic levels. I have included the my layout of two charts from the report to simplify understanding of this tool. They are an addition to the original document which must be read in its entirety before using it except where it overlaps with other tools.