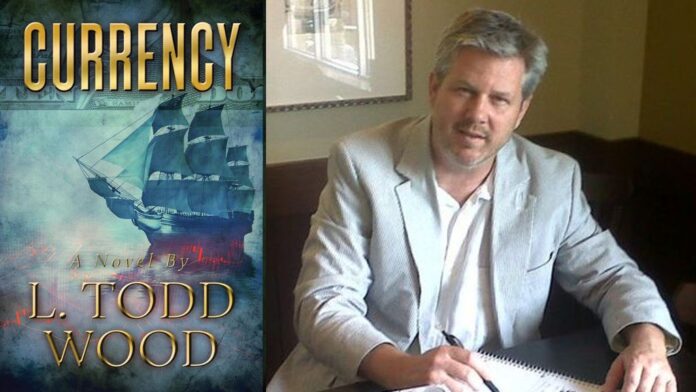 “Currency combines history, finance, romance and action into a timely and entertaining read on a subject that has serious economic and national security implications. My wife and I both enjoyed reading it.” —Hon. David M. Walker, Former U.S. Comptroller General.

CURRENCY is a debut novel that captures the reader with page-turning adventure while it addresses head-on today’s most pressing and intense global economic, military and political issues. Author L Todd Wood’s real world experience on both Wall Street and at the center of the US Military Special Operations world combine with a love of history and command of current global issues to create an intense, gripping, timely story.

Currency weaves the historical adventures of our US Founding Fathers who built the country’s early economic structure, with current day hero Connor Murray. Connor unexpectedly finds himself thrust into a world shaped as much by greed, betrayal and violence as it by heroism, loyalty, love and the quest for personal peace. Fate forces Murray to navigate events that play out on the world stage. The United States’ current economic weakness collides with its international rival’s very real drive for economic, political and military power.

This collision produces an intense drama and adventure that is as scary as it is possible amidst the world’s current chaotic state of affairs. If you love a good adventure story then Currency is essential reading. If you’re concerned about how the United States’ current economic challenges could play out for the country in a very real way then Currency will challenge and compel you.

L TODD WOOD is a graduate of the U.S. Air Force Academy, an aeronautical engineer, an Air Force pilot, and a former international bond trader with expertise in conducting business in over forty countries. He is a national security columnist for The Washington Times and editor-in-chief of Tsarizm.com.