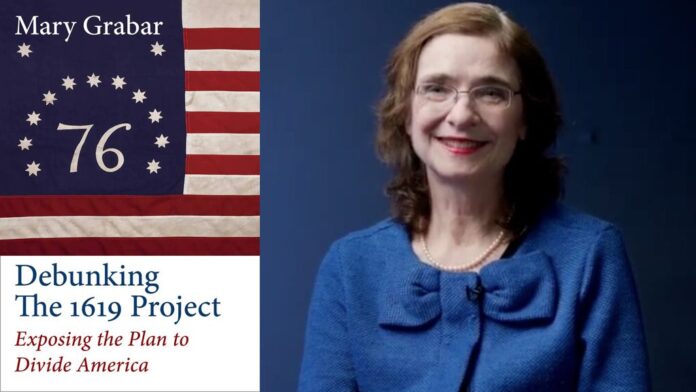 According the New York Times’s “1619 Project,” America was not founded in 1776, with a declaration of freedom and independence, but in 1619 with the introduction of African slavery into the New World. Ever since then, the “1619 Project” argues, American history has been one long sordid tale of systemic racism.

Celebrated historians have debunked this, more than two hundred years of American literature disproves it, parents know it to be false, and yet it is being promoted across America as an integral part of grade school curricula and unquestionable orthodoxy on college campuses.

The “1619 Project” is not just bad history, it is a danger to our national life, replacing the idea, goal, and reality of American unity with race-based obsessions that we have seen play out in violence, riots, and the destruction of American monuments—not to mention the wholesale rewriting of America’s historical and cultural past.

In her new book, Debunking the 1619 Project, scholar Mary Grabar, shows, in dramatic fashion, just how full of flat-out lies, distortions, and noxious propaganda the “1619 Project” really is. It is essential reading for every concerned parent, citizen, school board member, and policymaker.

Mary Grabar is a resident fellow at the Alexander Hamilton Institute for the Study of Western Civilization and the founder of the Dissident Prof Education Project. She taught at the college level for twenty years, most recently at Emory University, and her work has been published by The Federalist, Townhall, FrontPage Magazine, City Journal, American Greatness, and Academic Questions.

For America’s Children: The Island of Free Ice Cream By Jack Posobiec

In Trump Time: A Journal of Americas Plague Year